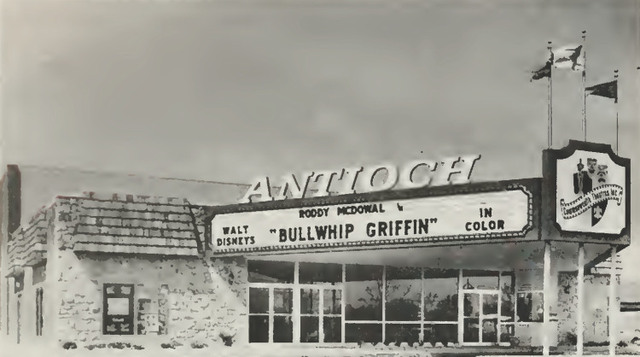 Located on Antioch Road at the edge of the Antioch Center. The Antioch Theatre originally a single screen which was opened by Commonwealth Theatres on March 30, 1967 with Walt Disney’s “The Adventures of Bullwhip Griffin”. It had 800 seats. It was later converted to a twin. It was located at the opposite end of the Antioch Center from the Chouteau Cinema.

The Antioch was built for Commonwealth Theatres in 1966. The May 9 issue of Boxoffice Magazine reported that the house would have 910 seats, and was designed by Milton Costlow & Associates. Construction was slated to begin June 15, and completion was expected by November 1.

NGC received approval from a Federal court to acquire the Antioch and Metcalf theaters in 1968, according to Boxoffice of September 30 that year. The Antioch was mentioned as a Mann theater in Boxoffice of December 12, 1977.

I’ve found the Antioch Twin identified as a Dickinson house in Boxoffice as early as December, 1996, but I’ve been unable to discover when ownership was transferred to that circuit. I haven’t been able to find out when it closed, either. It was still being mentioned in Boxoffice in early 1998.

Dickinson acquired this and the Metcalf when they bought out Mann’s interests in Kansas and Missouri. If anyone has any links to additional information about the NGC/Federal court approval I would be interested in that information. NGC/Mann’s interests would also have included the Plaza downtown as well.

Here is a fresh link to the June 19, 1967, Boxoffice page with the two photos of the Antioch Theatre.

As a bonus, on this page of Boxoffice, January 15, 1968, is a photo of the Antioch’s lobby and concession stand.

The Antioch and Metcalf must have run every Disney film the studio churned out. The two theaters did have their share of semi-exclusives, mostly B-level stuff that wouldn’t pass muster at the drive-ins.

There was a bit of a shock when the Antioch marquee changed from, “The Love Bug” to Carroll Baker in “Paranoia” with a 4-foot tall “X” on that massive marquee. Apparently it wasn’t a big deal, because sometime later the theater ran a Swedish double bill: “Inga” and “Fanny Hill”. Other than those engagements, The Antioch played mostly G and M/GP/PG features until the late ‘70s. Of note, after “Star Wars” completed its first year at the Metcalf, it appeared on a second screen in Kansas City—The Antioch, with a semi-exclusive for six weeks or so, before going wider.

The Antioch may have been the last single-screen theater built in Kansas City.

Star Wars played exclusively at the Glenwood before opening on a second screen at Antioch.

The former Antioch 2 Theatre is currently a Berbiglia liquor store.

The Antioch 2 Theatre opened in 1967 (with the first movie being “Bullwhip Griffin”, and closed in 1999 (with the last movie being a dollar showing of the 1998 “Parent Trap” remake).