The Bannister Mall 5 was located on the out lot of the Bannister Mall just three blocks from the Bannister Square 6. Opened by Commonwealth Theatres on December 9, 1980. Later operated by United Artists, and finally by an independent operator, it was closed October 3, 1999, and has been demolished.

Chuck1231, you are right, I pulled my early comment from this page.

After several days of a small box ad stating, “5 Incredible Gifts for KC! THE BANNISTER MALL CINEMAS' GRAND OPENING” (with no indication it was a Commonwealth house), it finally opened Friday, December 19, 1980, with Jane Fonda in 9 TO 5 in three auditoriums, Marlon Brando and George C. Scott in THE FORMULA, and Disney’s THE ARISTOCATS. (Local radio station KY-102—now known as KCKC—along with the theater offered a Puerto Vallarta vacation for two in a premiere contest.)

Closed by UA on Thursday, February 4, 1999, with STAR TREK INSURRECTION, RUGRATS, A BUG’S LIFE, DOWN IN THE DELTA, and STEPMOM.

Limped along for a month before finally shuttering for good on Sunday, October 3, 1999, with THE HAUNTING, THE MUMMY, Omar Epps in THE WOOD, Disney’s TARZAN, MUPPETS IN SPACE, WILD WILD WEST, BIG DADDY, and THE MATRIX. [Kansas City Star] 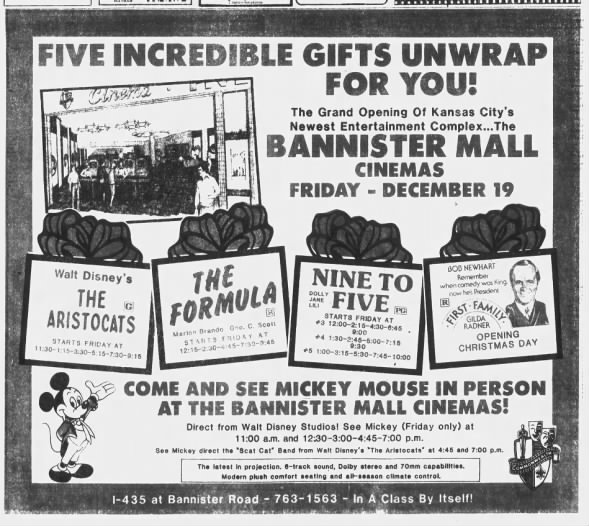