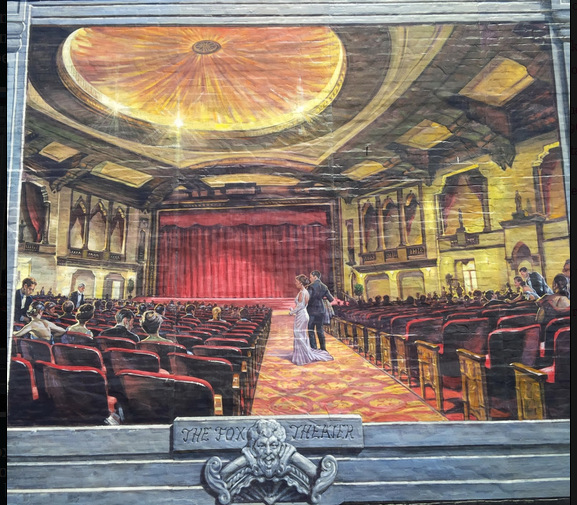 The Fox Theatre opened by Fox Midwest Theatres in 1930. It was closed by Mann Theatres on May 7, 1974 with Jack Nicholson in “The Last Detail”. It had been purchased by the Central Assembly Church in March 1974. It also hosts occasional screenings of old movies, wedding receptions and special events.

The building is intact and in great shape and has been on the National Register of Historic Places since 1990.

Here is a 1950 article on the demise of the Fox architect:

Larry P. Larsen, 57 years old, 119 North Ball street, died at 12:40 o'clock this afternoon in St. John’s hospital in Joplin. He had been ill three years,, but was not hospitalized recently until about 11 o'clock this morning.

He was an architect and contractor, having built more than 100 theaters in all parts of the country. He designed and built the Fox theater in Joplin and the Civic Theater and Civic Drive-In restaurant in Webb City. He also remodeled the Junior theater, which he owned, and the sanctuary of the Presbyterian church.

A 1986 view of the Fox Theater building in Joplin.

Was looking at the E. 5th St. & Virginia Ave backstreet view of the Fox Theatre on the Google Maps function. Theatre auditoriums that were located on side streets were generally plain with only common brick, but not the Joplin Fox. The Fox auditorium exterior is impressive with tapestry brickwork and massive stagehouse. Obviously there also had once been a Virginia Ave entrance.
Take a look for yourself!

Does anyone know where I can find a picture of Larry?

Showed the 1967 West German production HELGA on Wed. November 13-Sat. November 16, 1968. But the unrated film, released in the US by American International, was also privately exhibited at the Fox Theatre in special screenings for local high school students (separated by gender) during school hours on Monday, November 25, at which their parents or guardians were also invited to attend (“Parental permission…Sex Education movie schduled [sic] for students”, Joplin News Herald, Thursday, November 21, 1968, pp. 2A). The screening, allowing for a few catcalls from the audience, received a post-show report. (“Students witness ‘Helga’”, JNH, Monday, November 25, 1968, pp. 2).