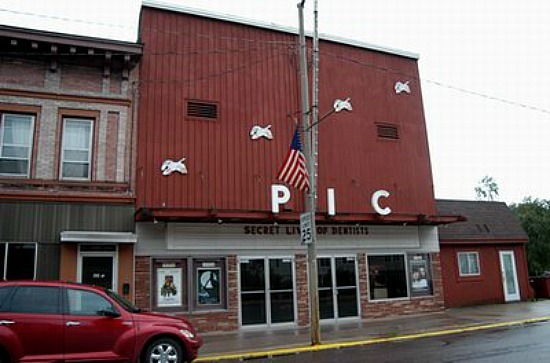 The Orpheum Theater opened in 1910 as a vaudeville theater. In the 1920’s the Orpheum Theater started showing movies. In the 1940’s, it was operated by Fox Wolverine Corp., a subsidiary of Fox Theatres. In 1959 there was a fire at this theater and it was remodeled and renamed the Pic Theater. This theater has belonged to the Mason family since it first opened. By 2016 it had been renamed The Studio Pizza & Orpheum Theater.

Two wooden buildings, both landmarks of Hancockâ€™s earlier days, were virtually destroyed by fire of undetermined origin Thursday night. The Mason building was gutted by flames that spread in an adjacent apartment building.

The Mason building, which had two apartments upstairs, was built by the late Col. William Mason before the turn of the century. Among the Mason structures threatened was the Orpheum Theater, Hancockâ€™s last. The Kenesaw Theater was destroyed by fire in April.

Now called The Studio Pizza & Orpheum Theater. No movies scheduled, only live performances on stage in the theatre. Website: http://www.thestudiopizza.com/Site/index.html

For a time in the 1920s it was operated by the Thomas Theatre Group.