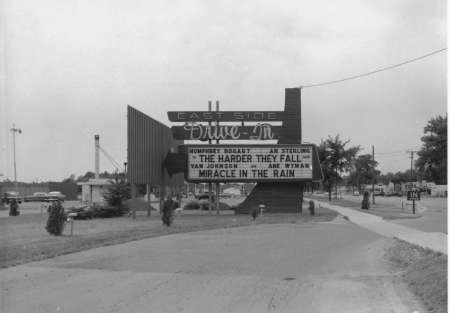 Located in Harper Woods on Harper Avenue, this was the first drive-in to open in the Detroit area. It opened as the Drive-In on May 26, 1938. The movie on opening night was “The Big Broadcast of 1938” with W. C. Fields. It had a capacity for 675 cars. Later renamed East Side Drive-In, it was operated for many years by General Cinema Corporation. It was later part of the Wisper & Wetsman chain Car capacity in later years is listed at 970. In the 1970’s it was showing adult movies.

Here is a link:
http://www.michigandriveins.com/detail.asp?id=41

Site is now a hotel(Parkhurst Inn). There is a light pole with two lights on top in a small carpark behind Parkhurst Inn, that might be from the drive-in?

In a fun article in the Feb. 5, 1949 issue of Boxoffice, titled “Drive-Ins as the Projectionist Sees Them,” Don Kennedy described an occasional problem at the East Side.

“Screen visibility has another enemy – the moonbeams. My advice is to never place a screen so that it faces toward the southeast. (If you are going to build in South America, I guess the position is just the opposite.) We found that out at the East Side Drive-In in Detroit, which faces in just about that position. When the moon is in its full period, conditions are worst. On a clear night it will hit the side of the screen structure as it rises, throwing deep shadows and then as it moves around to a more direct view of the screen, the light may become intense enough to cut down visibility and clarity of the picture on the screen.”

I see no evidence of a light pole with two lights near the carpark of the Park Place of Harper Woods that would date back to the 1970s. By 1983, most of the property was redeveloped. By 1999, all traces of the drive in were gone.

About the only thing that may have existed when the drive in was operation that still remains is the telephone poles that run along the SW edge of the property.