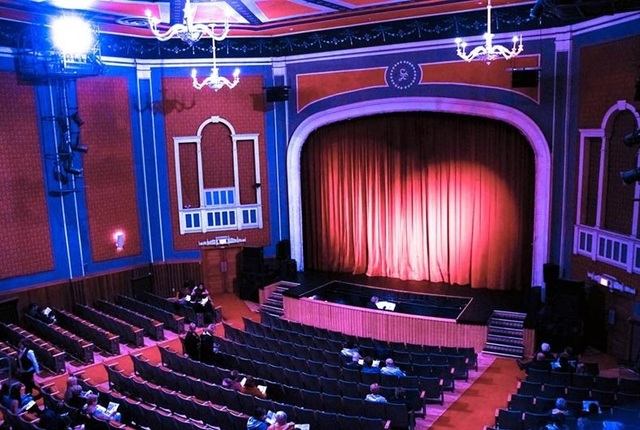 Built by MacSween Contractors for its owner, John Connors, in the 1920s, to the specifications of the famed Victorian show houses. In keeping with the times, live performances of every description including boxing matches, were staged here in the early days. In its first fifty years, the Savoy provided the setting for a host of local performers and theatrical productions, and for thousands of visiting stars.

In the early 1970’s, through the initiative of Mayor Dan Munroe, the Town of Glace Bay purchased the theatre from Famous Players, who were using it as a movie house. With the help of both Federal and Provincial funding, the town immediately embarked on a renovations program to restore the Savoy. The renovations followed strictly along the lines of the original building and no major changes were made to the fine superstructure. The rococo cast iron chandeliers were retained and refurbished, but new sound and projection equipment was installed and dressing-rooms and other facilities updated.

The Savoy was officially opened in May 1976, with Lieutenant-Governor Grosse and Premier Regan of Nova Scotia in attendance, and live radio coverage. Special guest was CBC Newscaster Lloyd Robertson. The Glace Bay and Sydney Rotary clubs combined to mount a ten-day performance of “The King and I”, which at the time broke all box office records in the province.

I was the youngest cast member of this great production and my love of this theatre and grand theatres like this have always been a passion of mine.

Here is a picture of its interior: View link which does appear to be a restoration of the original 1927 interior (which cannot be said of its current exterior facade).

John Connors and later his wife, were the owners of this theatre while the business was operated jointly with this family and the Famous Players Canadian Corporation.

John Connors and later his wife, were the owners of this theatre while the business was operated jointly with this family and the Famous Players Canadian Corporation.