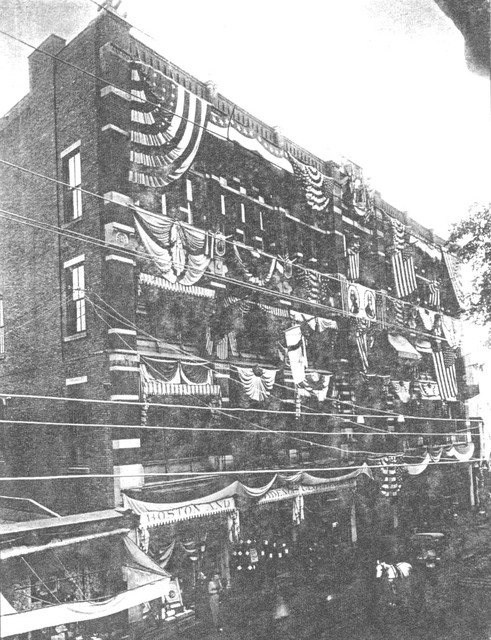 The Music Hall Building was erected in 1880 for Lucius Bowles Darling who owned a fertilizer company in Pawtucket.

It has a seating capacity of 1,700 and boasted the longest staircase in the country. The theater was located on the second floor and the interior had three sections; orchestra, balcony and second balcony.

By 1926 it had been taken over by E.M. Loew’s Theaters Inc. In 1936, the facade of the building was given the Art Deco look and a new tenant moved to the first floor. That new tenant was The Peerless Company. Modern Shoe remained in its former location in the Music Hall Building.

The theater was originally designed for opera and the “vaudes”, but needed to compete with the Leroy and Strand theaters for the silent film crowds.

I have talked with a person who used to visit the theater as a child and he remembers mostly that the Music Hall favored the westerns and cowboy movies featuring stars like Tom Mix and Buck Jones.

The building was razed in 1970 for the second pass of the Downtown Revitalization Project.

re: “The building was razed in 1970 for the second pass of the Downtown Revitalization Project.”

I don’t understand the lunatic thinking in a phrase like “Downtown Revitalization Project,” when it refers to the wanton destruction of a great historic building. Do you know if the upstairs theatre part remained during the Peerless years or did that become converted to other uses as well?

Gerald, I agree with the thought of ‘Revitalization’ being synonomous with destruction. Downtown never regained its former glory. Even as a child, I loved going with my mother to Shartenburg’s to get my Cub/Boy Scout uniforms and walking into Peerless or Dalton’s. We often got out shoes from Modern Shoe. Downtown Pawtucket was a treat. I never realized the history of the Music Hall building until two days ago. There was the Roger Williams Hotel that catered to middle class but was used as a redlight hotel in the 60’s and converted to office space sometime in the 70’s.

Anyway, sidenote here, directly across from the Music Hall is a white granite building that was called the Albert Vitaldi (or Vitali) building and was the Bard Hotel. It was either he or his son that was responsible for restoring the Leroy theater in the 80’s. Sadly, the corrupt city council would not give him some tax incentives to ease his losses. Yes, LOSSES, as the man was more interested in saving the Leroy than making a profit.

I do not know offhand if the upstairs existed as a theater by the time Peerless moved in the first floor. However, the first floor was always used for commercial stores while the theater was on the second floor. There is this one guy that I see a couple times a week and I will ask him if he knows when the theater closed or if it was converted to other uses.

Wow, these are GREAT!! Yes, too bad they felt the need to RE-vitalize something that was very vital already. My first job after high school was in the credit office of the Peerless (I hated that job!), and the store was 4 stories in all, with no remnant of the Music Hall except for that sign etched into the stone on front. I remember well the Modern Shoe Store, where the salesperson took you with your purchase to a service desk where they inserted your sales-slip into a container that was then sent via wires to a “balcony office” above. It looked like a bunch of clothelines! From my early school days in the 40s, there was no Music Hall. The Roger Williams Hotel was always considered “sub rosa,” and I don’t know of the Bard Hotel (although I knew Albo Vitale). If it’s marble, then it must have been the bank that was once there. I do not remember a Dalton’s though.

Marialivia, thanks for your invaluable contribution as someone who actually worked there!!

My bad on Daltons, I meant Grants!

For Marialivia; my mother remembers what she calls these ‘cylinder’ things on some ‘strings’ at Peerless Co. He-he, I guess that’s close enough! I do recall a cylinder and vacuum system for some downtown Providence stores like Shepards and the Outlet.

My mother asked me to tickle your memory and so I don’t throw this thread way off target, pardon me if I don’t reply. She wants to know if you remember the name of a downtown store that could have been a Fanny Farmer that sold fresh roasted peanuts and chocolates? Also, she seems to think it was next door to a music store with the record listening booths. The names of both stores if you can remember.

For Gerald; here is an illustrative picture of the Music Hall in Providence.

The architects for the Music Hall were Stone & Carpenter out of Providence, RI

Great! After the Music Hall in Providence burned in 1905, it was closed as an entertainment facility, repaired, and reopened as the Providence Public Market. It stood until 1955, and as a youth I must have seen it (I used to go to the R.K.O. Albee down the street) and not taken notice.

Roland: THE “cylinder” things into which the tubes were inserted were used in several store and were inserted into a pipe (kind of like drive-up windows at banks now). But the ones at the Modern shoe store were the only ones that went up on these clothesline-type wires!

Yes, I knew Albo Vitale who once had an “interesting” store on Lonsdale Ave. where he sold all manner of things, such as fur stoles and portable bars for your living room, etc. At one time this was an IGA Store managed by a friend of my family.

There was a small Fanny Farmer’s store on Main Street next to the Boston Store, which is now the location of the DMV. I don’t know if they sold Planters Peanuts there, but there was indeed a “Mr. Peanut” figure who walked down Main street giving samples! I remember Central Radio on East Ave., across from the Strand Theater, where you could go into a booth and listen to records to try them out. As I mentioned in previous postings, I was a “candy girl” at the Strand when I was in high school, and loved every minute of it! Central Radio was right across the street.