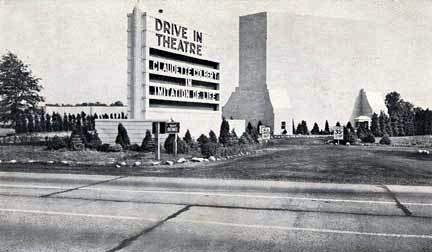 Built in 1936 and opened in June-July 1937, the Union Drive-In initially had a capacity for 640-cars, later increased to a capacity of 1,400 cars. It was the first drive-in located in north New Jersey. It closed in 1983 and was replaced by housing on this heavily developed highway.

The drive-in was not replaced by retail but by houses. You can see the housing development here, above the park on the left side of the frame.
http://tinyurl.com/y9gvlb5

I miss the Union Drive-In. Anyone know the name of the woman who used to do the telephone recording? She had a really gravelly voice (probably from too many years of smoking) which went something like “This is a recorded message from the Union Drive-In Theater located on Route 22 Eastbound Lane in Union. The box office opens at 6pm our features are… (Name of movies then announced), Admission is $3 for adults, children under 10 are free thank you for calling.”

I totally remember this! When younger, in pj’s – playing on the swings as it got dark….sitting on top of the hood of the car…those speakers that clipped to the car window …. those stinky coils that you lit to keep the bugs away…Yogi going across the screen like a bobble head doll…everyone putting their lights on and blowing the horn when the movie reel got stuck…then, when older, going with a group of kids and some of us hiding in the trunk of the car so we did not have to pay …

Between 1954 and 1966 the drive-in was rebuilt and a new screen tower was built on the east end of the lot. It looks like to increase the size of the parking ramp.

Was this the Route 29 Drive-In at one time?

Here is a better address:

It is a bunch of apt buildings now.

My Dad Richard Gaine was the projectionist at the Union Drive In. He moved to Miami in 1970 and worked for the Turnpike Drive In. till he retired. Me and my Mom went to see almost every showing in the 50s. I would fall asleep after the double feature, as the first movie was repeated. I think I saw every movie that came out in the 50s. I remember my Dad used to bring fire crackers to work so he could set one off to wake up the folks that fell asleep when the show ended,

To partly answer Drive-In 54, the Motion Picture Almanac’s listing of that drive-in’s capacity went from 650 cars in 1964, when it was run by Eastern Management Corp., to 1400 cars in 1965, when General Cinema Corp. took over.

Strangely enough both the Route 29 (650, Eastern) and the Union Outdoor (1400, General) were in both the drive-in and circuit ownership lists in the 1965 MPA.

Also, when its land was sold from Susan L. and William H. Nealon to S. and G. Theatres, Inc., in December 1941, it was called the Drive-In-Theatre on Route 29 by The Exhibitor. As with many such prewar drive-ins, it seems to have been known mostly as just the drive-in of a particular highway or town.