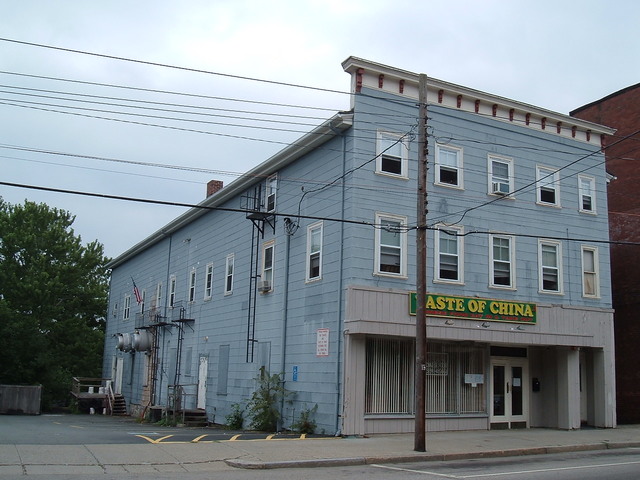 This theatre was listed in the 1914 city directory and was presumably an early movie theatre.

“The year of 1909 saw the advent of the first movie theatre in town, when P. J. McCahey opened the Star Theatre, near where the Big Star Market now stands. High class entertainment was advertised, including pictures of the Hudson River Celebration and the Pittsburg-Detroit world championship baseball game. Reserved seats were fifteen cents, and regular seats were ten cents. In 1917 the Star Theatre was showing the silent movie version of "Snow White,” starring Marguerite Clarke and featuring a local boy, “Blue” Rice, as one of the seven dwarfs. All seats were then twelve cents. Joe Gorman was the owner of the theatre at the time.

The building that was the original Star Theatre of East Greenwich still exists. The Star was located next to Odd Fellows Hall on Main Street. Odd Fellows Hall had been completed in 1878. It was a building with stores at the ground level and a social hall on the second floor. Over the decades , as a community hall, Odd Fellows Hall was used for theatrical performances, concerts, lectures. As the “East Greenwich Opera House” in 1902 and 1903 it presented first class drama, minstrels and vaudevilles. The life of the hall continued until 1946 when a fire that broke out on April 15 completely destroyed the building. A photo of the place in flames, in a 1991 issue of The Packet, a periodical about East Greenwich history, shows what is identified as the Star Theatre next door. The Star Theatre building was not affected by the fire and survives to this day. There are apartments as well as a ground-level Chinese restaurant called Taste of China in the three-floor structure. Here is a photo of the place now.

The current vacant lot to the left of what was the Star Theatre is where Odd Fellows Hall used to be. To the right of the Star building today is the Greenwich Hotel, formerly Updike Hotel. The Main Street location is near the intersection with Church Street and across from legendary Jigger’s Diner.

[i]TO SPEAK FOR HOOVER FUND
The Rev. Victor Herbert will speak at the Star Theatre in East Greenwich tonight in behalf of the starving people of Europe.[/i]

Facebook comment, from East Greenwich Then and Now site: “Charlie Ellis Jr. We think the upper floor was the Star Theater where silent movies were held. The Booth family ran the movies. Doris played piano, the rest of the family sold tickets, sold popcorn, swept up after the show and everyone enjoyed the show! Welcome to Silent Movies in a small town ! Projectionist was Ora Booth.”