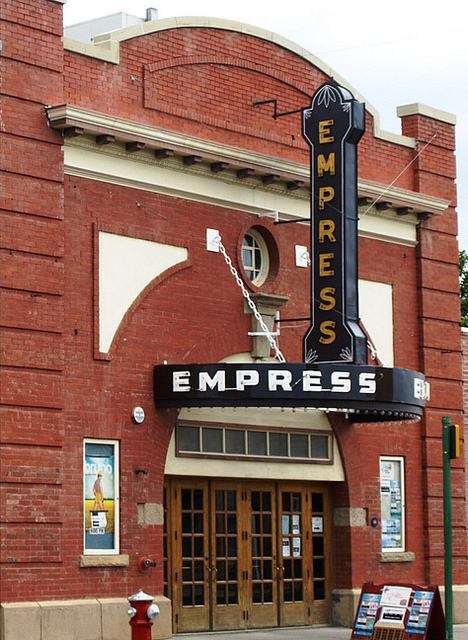 Built in 1910, the Empress Theatre was originally built as an opera house, and later served as a vaudeville theater, a legitimate theater and finally a movie theater.

Outside the brick walls of the dressing rooms, a tradition developed in the 1920’s for perfomers to leave their names written on the wall, which continues to the present day.

In 1937, the theater received a total facelift, which meant the addition of a 100-seat balcony, new restrooms, a concession stand, and, unusually, neon tulips decorating the auditorium ceiling, which the architect, Daniel Boyle, added at his wife’s suggestion.

Since the late-1940’s, the Empress Theatre has mostly been used for movies. By the late-1970s, however, Fort Macleod’s sole remaining movie house was in serious danger of being closed, and in 1982 the Fort Macleod Provincial Area History Society acquired the theater. It made close to $1 million in repairs and renovations to the Empress Theatre, and today this unique theater still shows first-run films, as well as hosting concerts.

I attended several movies there in the winter of 66-67.The balconey was a little odd,and since reading here that it was a tack-on,that’s not surprising.My main impression was OLD,now I know why.It was the only operating theater for many miles around.Lethbridge had a really fine,large theater at the time.There was a bldg in town that appeared to have once been a theater for the once wild and wooly Ft.Macleod audience.

Famous Players Canadian Corporation had absolutely NOTHING to do with this theatre.