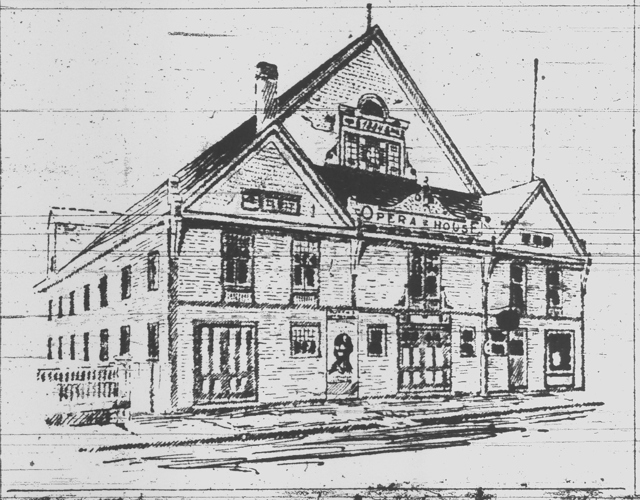 This long-gone Westerly movie and vaudeville house existed in the 1910’s and 1920’s, judging from listings in the Westerly city directories and ads in the Westerly Sun. Additional information about it would be appreciated.

Ironically, and without my previous knowledge, the above posting about a January 2, 1925 program had another sad reality. In the early morning hours of January 3, 1925, after the final presentation of North of ‘36 and 4 acts of vaudeville, the historic Bliven Opera House burned to the ground! It was one of the most spectacular blazes in the history of Westerly and it destroyed not only the theatre but two tenement houses and gutted a third. No lives were reported lost.

“David Novogrod, owner of a chain of three theaters in Westerly and Pawcatuck, including the Bliven Opera House…was in New York when the fire broke out, on a trip to book engagements for the theater…

“The Bliven Opera House was constructed in 1884 for C.B. Bliven, and for many years was the only place in Westerly used for theatrical performances, fairs, and indoor sports. In 1904 the C. B. Bliven Opera House company was formed and took over the house, making extensive improvements. David Novogrod purchased the theater last September and it was closed for some time while extensive alterations were made…”

The house was never rebuilt, although the following year saw the opening of a new theatre, the United, over a couple of blocks on Canal Street.

Here is a drawing of the Bliven Opera House in its early days.

What were the other two theatres in Novogrod’s chain?

Roger, the article didn’t mention them by name but they must have been the Lyric and the Central. But that’s just my educated guess. What else was there? The Central was definitely on the Pawcatuck side of the Pawcatuck River, placing it in Stonington, Connecticut and not in Westerly, RI. And the Lyric, “on the bridge,” but with a “West Broad” address also must have also been in Pawcatuck. I walked the area yesterday but could not see even a smidgen of evidence that suggested the two former theatres.

There is no West Broad Street in Westerly. At the bridge Broad Street in Westerly becomes West Broad in Pawcatuck, with numbers ascending in opposite directions. When the Bliven burned, I believe it was the only theatre in Westerly proper. I am having the listings for the Lyric and the Central corrected to read “Pawcatuck, Stonington, CT” from “Westerly, RI.” So I am giving Connecticut two theatres! The confusion arises from the fact that Pawcatuck and Westerly are essentially one village, and newspaper ads never specified whether a theatre was actually in Westerly or Pawcatuck. The Westerly Library has a card file with references under “Theatres” that refer you to articles in the Westerly Sun.

As for the Bliven location today, there is a long building with a stone that reads 1926 (a year after the fire) with the name Morrone. It looks like it may have been a car garage at the outset. Today it houses shops and a liquor store. Main Street runs parallel to the Pawcatuck River, on the Westerly side. All three theatres were only a couple of minutes' walk from each other.

The book Westerly’s Gold by Thomas A. O'Connell mentions the Bliven briefly and indicates that the admission prices for the 1901 shows The New Minister and Sag Harbor were 25, 50, 75 cents and $1. He says that the Bliven was also used for graduations.

The building opened as a skating rink in 1884 and was converted to a theatre in 1885.

The Bliven Opera House in Westerly is listed in the 1897-98 edition of the Julius Cahn Official Theatrical Guide. The manager is C.B. Bliven. The seating capacity is 1,136. The theatre is on the ground floor and there are 4 in the orchestra. The house has both electric and gas lighting. The proscenium is 28 feet wide by 20 feet high. The stage was 30 feet deep. The population of Westerly was 10,000; Hotels are the Dixon and the Foster.

Request to show fight motion pictures at the Bliven in 1911 meets with opposition from church groups and others who assert that showing such films would be injurious to the community of Westerly.
ARTICLE