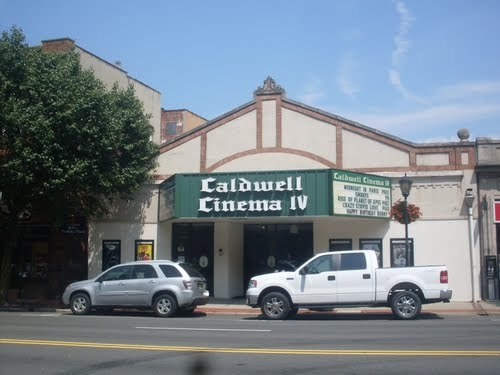 Originally opened as the Caldwell Theatre in 1913, and was closed in the 1950’s. It was converted into a bowling alley, and later served as offices and a factory.

Clearview Cinemas reopened the theatre as a four-plex in the late-1990’s. In June 2013, Bow-Tie Cinemas took over when they purchased Clearview. The theatre celebrated its 100th anniversary in 2013. In late-August 2018, the theatre suffered from the devastating flood that hit most of Caldwell. Water poured in the theatre and basically destroyed everything inside. Bow-Tie decided to remodel the theatre with luxury electric recliners, new curtains, drapes, carpet and an all new box office and concession stand. It reopened on December 21st, 2018 after renovations were completed.

It was closed on March 16, 2020 due to the Covid-19 pandemic. It was announced in September 2020 that the closure would be permanent.

The second paragraph reference to the Park theater is incorrect. This article is all about the Caldwell Cinema.

Plans for a perkier downtown Caldwell are stuck in limbo while competing movie developers face off over who can run a theater on the six-block strip of Bloomfield Avenue.

The former Park Theater, located in the heart of downtown, was supposed to reopen this month under new ownership with five screens and new plush seats, carpeting, and curtains after years of use as offices, a dance studio and a bowling alley.

The cinema was touted this summer by Mayor Paul Jemas as the cornerstone of downtown revitalization. The borough’s walkable stretch of Bloomfield Avenue offers daytime shopping but lacks a large magnet to draw people for food and entertainment on weekends and evenings. The legal dispute pits Jesse Sayegh of Cedar Grove against Chatham-based Clearview Cinemas and its owner, Bud Mayo. Both men built their fortunes in the movie business by focusing on small downtown theaters. Clearview now runs 45 movie theaters in New York and New Jersey, including most of the theaters in the western Essex and eastern Morris County region where Caldwell is located.

At issue are the details of a year-old, $9.5 million deal in which Clearview bought Sayegh’s theaters in Upper Montclair, Cedar Grove, Kinnelon and Middlebrook, according to court records.

Mayo’s attorney maintains that a clause in the contract prevents Sayegh from opening a movie theater within seven miles of any of the four locations. The Caldwell site at 317 Bloomfield Ave. is 2.59 miles from Cinema 23 in Cedar Grove and 3.51 miles from the Bellevue Theater in Upper Montclair.

Sayegh holds that the agreement allowed for one exception in an “undisclosed” location, which turned out to be Caldwell. He said he would not comment on the matter while it is in litigation.

The suit is heading for a spring trial. In the meantime, a state Superior Court judge ruled in October that Sayegh must halt construction plans until the dispute is settled. The injunction blocks a third party from developing the site.

If Mayo prevails, the theater could be delayed for five years unless Sayegh and Mayo reach a deal before then to allow Clearview to run the cinema. Sayegh’s offers so far have been “unreasonable,” according to Robert Lister, Clearview’s vice president.

‘'Five years? We’d be in college,“ exclaimed Jessica McDonnell, an eighth-grader from West Caldwell who learned of the legal dispute after school yesterday from a reporter.

News of the delay hit hard at Grover Cleveland Middle School, where hundreds of students from Caldwell and West Caldwell were looking forward to the freedom of walking to a local hangout. When they want to see a movie, they must ask for rides to theaters in Wayne, Parsippany, Montclair or Livingston.

‘'We’d be able to walk there, and our parents – we wouldn’t have to bug them for rides a lot,“ said Kevin MacKen, 13, of West Caldwell. "They get annoyed.”

That article is incorrect. The Park was located up the street from the Caldwell, and burned down. It was demolished and a bank now sits on the site.

This theatre was recently renovated by Bow Tie Cinemas in 2018