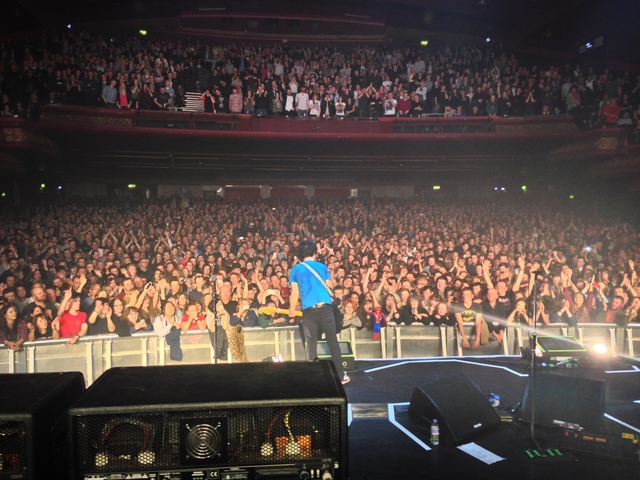 Located in the inner-city district of Ardwick Green, just to the south of Manchester city centre. Opened on 29th August 1938, the Apollo Theatre was built for an independent operator and was designed by architects Peter Cummings and Alex M. Irvine. The interior decorations were carried out by noted interior designers Mollo & Egan with the Holophane lighting designed by R. Gillespie Williams.

Seating was provided in the magnificent auditorium in stalls and circle levels. The proscenium is 53 feet wide and the stage 40 feet deep. There are 12 dressing rooms for artists who appeared in the variety shows which acompanied the film perfomances. It was equipped with a Compton organ. The Apollo Theatre was also equipped with a cafe and a 500 capacity ballroom.

It was taken over by Associated British Cinemas(ABC) from 31st January 1943. In April 1960, the World Premiere of the film “Hell is a City” starring Stanley Baker was held at the Apollo Manchester. The film was shot on location in nearby Levenshulme. The Apollo Manchester was re-named ABC Ardwick in 1962.

It was taken over by an independent operator from 30th January 1977 and began to stage pop concerts, with the occasional use for films to fill in dates. Eventually films were dropped.

This stunning Art Moderne style palace became owned by Apollo Leisure, followed by Live Nation. Now independently operated by the Academy Music Group, it serves as a 2,693-seat capacity (3,500 with standing room) concert venue. The cafe and ballroom have been unused for several years.

The O2 Apollo Manchester is a Grade II Listed building.

Apollo Did put screen in the cafe. My associate supplied the Projection Equipment

I remember that Wimpy Bar, food was awful, and it was run by some female dragon whose name escapes me.

From The British Pathe Library: The Beatles Live 1963:–

From The British Pathe Library: Premiere of ‘Hell Is A City’ 1960:–

Can anyone help me please? I am looking to find the name of the cook in the Cafe around 1962 or 63. I believe her surname was Sherratt but need a first name. She worked with my mum Anne Smalley who was her kitchen assistant. She was small and blonde if that helps jog anyone’s memory. Any info however small will help. Fingers crossed. Thank you.

Last August we celebrated 80 years of the Apollo

I carried out Managerial relief duties there on a number of occasions whilst it was an ABC. At the time I was based at the almost as large ABC Wigan which still seated 2,280 (original capacity 2,560).

Wigan Ritz is just a distant memory now but I am delighted that the Apollo continues to thrive as a live venue.

In answer to joncas, above, the entrance on Hyde Road was a common ploy used where many cinemas were located at busy corners. Though the main frontage is on Stockport Road, it was originally thought advantageous for the building to also have a presence on Hyde Road, directly opposite the popular Manchester Hippodrome theatre. As Ken’s photos show, with the removal of all the surrounding shops and cafes, this now looks very odd. In the original context it looked rather splendid. Both entrances were, originally, similarly decorated and both contained box-offices. The Hyde Road entrance also gave access to the integral cafe and ballroom. Some attempts were made to run it as a separate venue but it is currently abandoned.