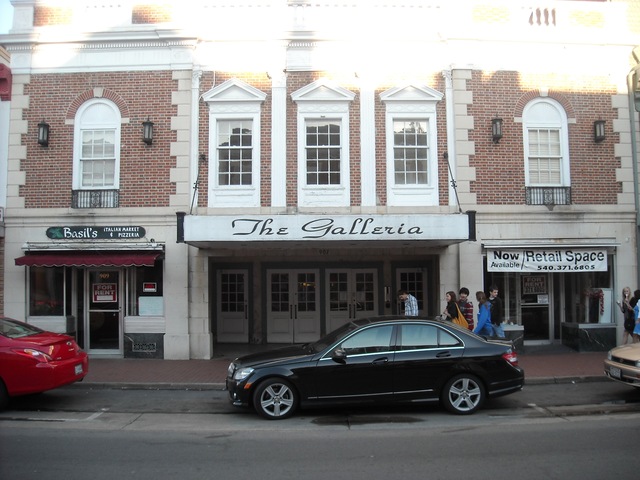 The Colonial Theatre, owned by Benjamin Pitts (Pitts' Theaters Inc.), opened in February of 1929. The first talking movie to play there was “The Voice of the City”. I don’t know when the Colonial Theatre closed (it was still open in 1957) but the Galleria (retail stores) is located at this address today.

The front is “preserved”,but the auditorium is no more.The place was used by a church a few years ago,as the theater across and down still is.My caustic comments are on this site elsewhere about this place.It should have been saved.

I worked for one of the last to attempt movies at the Colonial. The facility presented some issues that undoubtedly contributed to its downfall as a cinema. The auditorium was long and fairly narrow, with an even narrower screen. The projection throw was about 135 feet which combined with the narrow screen made it necessary to use an odd combination of lenses incorporating a reverse anamorphic for widescreen. Sound was made difficult by the high barrel vaulted ceiling and the length to width ratio, intolerable reverb, customers complained constantly about unintelligible dialog. The projection room floor was so limber that one had to tiptoe when in there in order to prevent the picture from bouncing.

I’ll agree that it should have been saved, but not as a movie house.

The theatre was occupied by a local Christian church Living Word Fellowship from about 1982 to 1990 (my dates are probably inaccurate). We renovated the auditorium ceiling and added a much-needed gas furnace after about 2 years of freezing. It was a beautiful!

Also, African American patrons had to enter the balcony using a separate door and climbing a long stairway – so much for equality.

The January 31, 1929, issue of the Fredericksburg Free Lance-Star devoted much of its space to Benjamin Pitts' new Colonial Theatre, which was set to open the following day. This article said that the Colonial was designed by the Richmond architectural firm of Lee, Smith & Vandervoort. The article says that the firm specialized in theater planning, but I’ve been unable to find any other theaters they designed.

I’ve found James T. Vandervoort’s surname spelled Van der Voort in a few places and Van Dervoort from one source. Merrill C. Lee designed a 1954 addition to the Virginia Museum of Fine Arts which included a theater. Horace L. Smith, Jr., is noted as the inventor of a double helix car ramp for parking garages, first used in 1928.