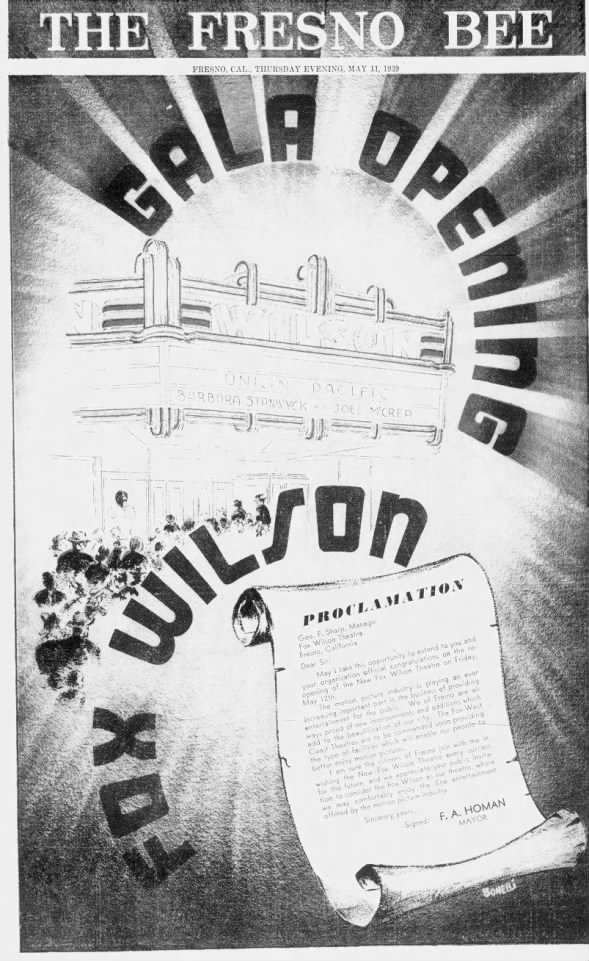 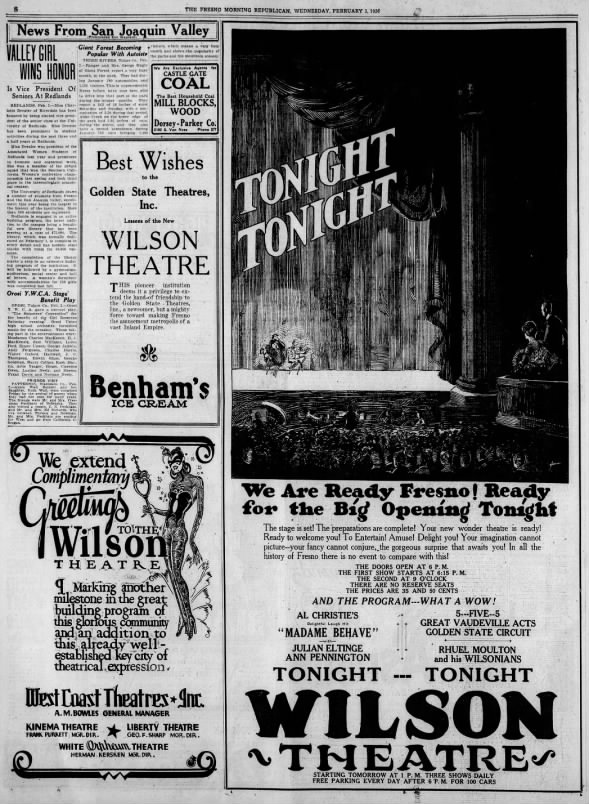 The Wilson had a large glass chandelier over the orchestra that was removed in the 1950s supposedly because it was difficult to maintain and there was fear it could collapse. The Wilson and the Warner Theater across the street both had large vertical blade signs visible for blocks on Fulton St. I have seen images of these signs taken in the 1930s but don’t recall as a child in the 1950s seeing them. For decades, the Wilson and the Warner were the two largest cinemas in Fresno.

Wonder if the WILSON THEATRE played “WILSON” the bio-pic on President Wilson?

Here is another photo:
http://tinyurl.com/yjkgw8t

Here is part of an August 1971 article from the Fresno Bee:

The Wilson Theater, which closed last weekâ€"after the final showing of a movie called “The Last Run"â€"is expected to have its doors reopened in a few months, but not without some major changes. Beset with similar problems to those plaguing the Wilson, two other major movie houses shut their doors early last year.

Wilson manager Robert Smith said a change in movie format and audience appeal is planned in hopes it will recharge sagging theater attendance. Plagued by legal and financial problems, the other major downtown theaters, Warnor’s and Hardy’s, both owned by Trans-Beacon, closed their doors simultaneously in January 1970. The non-renewal of the theater exhibitor’s lease at the Wilson, held by National-General, Inc., caused the closing of the theater but Smith said the building’s owner plans to contract with other theater exhibitors and to schedule the reopening of the theater in the “near future.”

Commenting on the closing, Smith said, “National-General operates other theaters in the area (the Crest and Tower theaters) and they felt they should concentrate their efforts at these two theaters, rather than spread it out any further. "We (the Wilson) haven’t had good attendance with the type of shows they are turning to, which are primarily R and X rated. We feel we could have more success with family type shows.”

Interesting. The Wilson was the primo house in Fresno for a short period of time. There was no comparison of the Wilson to the older, 1917 Liberty Theatre over on Van Ness. However, when the Pantages (now Warnors) opened almost across the street from the Wilson, the Wilson took a back seat. The Pantages was and is a big city movie palace in every sense of the term. Pricteca’s design in the auditorium may have borrowed from his other designs in San Francisco and San Diego, but the Fresno Pantages/Warnors remains at the top of the heap.

The Cornerstone Church which took over the Wilson a number of years ago, is to be commended for the great job they did in bringing back the Wilson.

When I was a child in 1950s' Fresno, the Wilson, along with the Crest and Tower Theaters was part of the Fox West Coast Theater chain. I literally watched hundreds of movies in this theater. It was Fresno’s theater for Universal, Paramount, and Disney movies. But I even remember seeing a studio preview screening of 20th Century-Fox’s “Say One For Me,” starring Robert Wagner, Bing Crosby, and Debbie Reynolds, at the Wilson. Saw all of the Dean and Jerry, and Francis The Talking Mule pictures there.

Prior to the 3/11 Wurlitzer going to Australia, the organ spent several years in Organ Power pizza in Kearny Mesa near San Diego.
This was the first of three such restaurants opened in the San Diego area and was also the last survivor.

At the 1994 convention of the American Theatre Organ Society, we rented the Wilson for a concert on a plug-in organ hauled in for the evening’s event. At that time, the Wilson was painted a garish purple and gold. Cornerstone Church has done a great deal to bring the Wilson back to what it had been.

Apparently, the Wilson organ (removed in 1973) was a very average sounding organ and was played fairly regularly once it was restored in the early 1960s. “The” theatre organ in Fresno has always been and will always be the 4-manual 14-rank Robert-Morton in the Warnors Theatre across and south on Fulton from the Wilson.