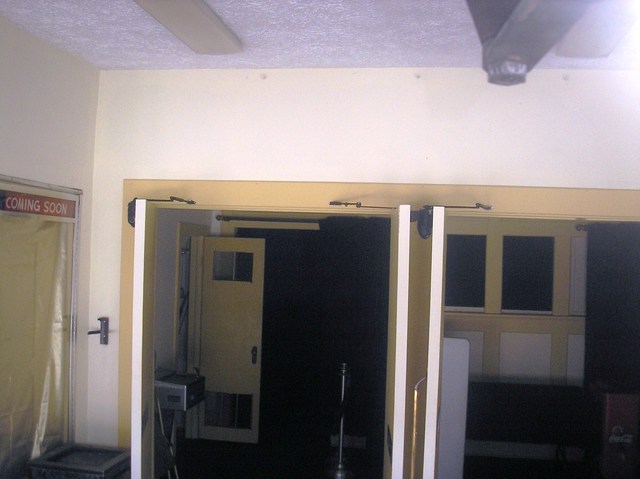 Nice Art Deco style gem on the street that borders TN and VA. The theatre became home to WHCB radio, followed by a church. By 2021 it was operating as a live music venue.

A 1996 view of the Cameo Theater building in Bristol and a larger view here.

Here are August 2008 photos of the former Cameo Theatre. Note that the property is for sale. 1, 2, 3

Although I did not get to see the interior, I was informed by some of the local merchants that it is relatively good condition.

Does anyone know what year this theater closed? I go to Bristol all the time to antique and was curious. There is a picture from 1983 that looks like the theater was closed than. As of yesterday 7/4/09 it is still for sale. At least the Paramount down the street is open.

I was fortunate enough to be able to see the inside of the Cameo this weekend. It was a day of mixed feelings. Happy to see a bit of theater history, sad to see what time has done. It has been closed a very long time. But the building and theater still stand.

I have mixed the sound at the Cameo Theater for the last 12 during Bristol Rhythm and Roots festival. There is no better place the acoustics are great its ashame someone don`t take it over if I had the money I would.

The Cameo was open for a bit during the late 80’s/early 90’s I saw The Little Mermaid and Beaches there. They started showing The Rocky Horror Picture Show at midnight on Saturdays and a kid that i went to school with was wrapped in toilet paper & someone lit him on fire. He was ok but they shut down again soon after. I hope it can come into good hands soon. I saw The Rescuers there as a little kid

i loved going to cameo as akid i was so sad to see it closed we really need a movie theatre downtown thank goodness new owners bought it and the cameo will be open again in 2018 i cant wait and hopefully very soon i be one the first customers.

The Cameo is now open as a concert venue. When I saw it almost two years ago,it was still being worked on but the owner told me they had already done a couple of band performances. There are no immediate plans to show movies