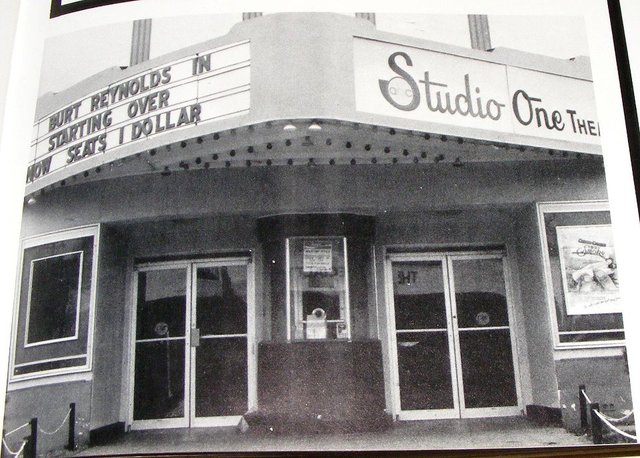 The Park theatre opened October 1, 1938 with the movie â€œVivacious Ladyâ€. The $30,000 theatre was built and operated by the Wilby-Kincy chain. It was a white cinder block building set back from the street with a small lawn in front. The two aisles auditorium was in the art moderne style with 26 rows of seats and 23 seats in each row for a capacity of 584.

Through the sixties and early seventies ABC Southeastern Theatres operated the theatre playing hold overs from the Tennessee, or as a road show house for big Disney films. I remember going there to see â€œMary Poppensâ€ and â€œThe Sound of Musicâ€ for the first time.

In 1975 ABC remodeled the theatre and changed the name to The Studio One in an attempt to try to make the theatre more upscale. They repainted the entire building and took out 3 rows of seats to enlarge the lobby and concession area. Although they played some first run films, the neighborhood fell into a sharp decline and Plitt Theatres (which had bought out ABC) closed the theatre on June 10, 1982 after the final showing of â€œSome Kind of a Heroâ€.

As a side note, from the mid sixties to the mid seventies Knoxville was mostly a two theatre chain city. ABC operated the Tennessee and Park Theatres also the Family, Knoxville, and Cinema Drive-Ins. They later opened the Westown Theatre in 1972. The local based Simpson Theaters Chain operated the Riviera, Capri Cinema, Capri-70 and the Capri Terrace theatres, also the Twin-Aire, River Breeze, and Chapman Highway Drive-Ins.

I lived in Knoxville in the 70’s, and for much of that time lived in East Knoxville, only a few blocks from the Park/Studio One. At that time, it was the only indoor theatre in Knoxville that wasn’t downtown or in West Knoxville along Kingston Pike, and also the last neighborhood theatre. I saw quite a few movies there, including HAROLD AND MAUDE. I am sad that the building is gone.

The very first movie I ever saw in a theater was ‘the Tingler’ with Vincent price,at the Park Theater.This was in 1959 and I was 5 years old. It was a typical William Castle film,and I remember a stretcher in the lobby in case someone fainted,and they had a row of seats blocked off. Just before the film began,a guy came in with a small wire cage and sat in the middle of that row. I heard that some seats were wired to give a mild shock but mine wasn’t.
I saw many films there over the years,as I lived in East Knoxville (Burlington) myself. I saw PATTON there.
The theater would still be standing today if not for Knoxville’s mayor at the time,Victor Ashe (well known for tearing things down). The building was being negotiated for by someone willing to restore and use it,when Mr Ashe ordered it demolished. A few hours with a bulldozer destroyed years of memories for myself and many others. Thanks,Victor.

At the link below is a small photo of the Park Theatre from about 1947:

Does anyone have pictures of the park theatre or know how to find any?my email is