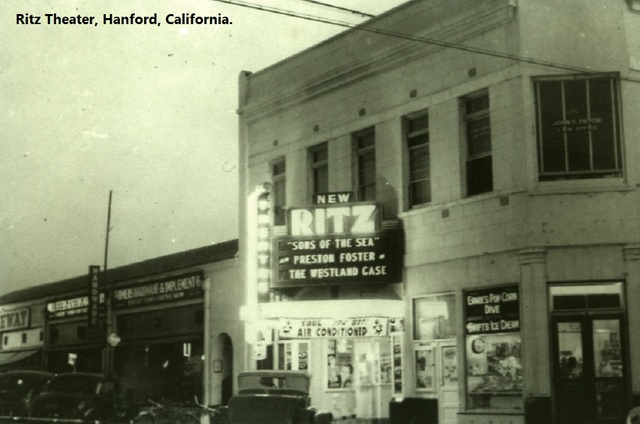 Located in what was originally the Old Bank Building. The New Ritz Theatre opened on January 2, 1938 with Ricardo Cortez in “Talk of the Devil”. It replaced the Ritz Theatre on Seventh Street. By 1950 and 1952 editions of Film Daily Yearbook the ‘New’ had been deleted and it was the Ritz Theatre. It was closed on October 31, 1953. It was demolished in 1956 for a parking lot.

The New Ritz Theatre on Irwin Street replaced its predecessor on Seventh with a grand opening on January 2, 1938 with “Talk of the Devil.” KMJ radio did a live remote with “The Pumpkin Center Barn Dance Gang” and 21 radio stars appearing live. The facility once housed the Old Bank Building. The old Ritz on Seventh Street simply replaced a single letter operating for a short time as the Rita Theatre.

Fox West Coast Theatre Circuit sold the after ten years. Golden State Theatre’s operated the theatre equipping it with air conditioning in 1949 but TV decimated business and the Ritz was sold in 1951. It relaunched under one final operator relaunching July 29, 1953. The theatre closed abruptly on October 31, 1953.

A classified ad in May of 1955 offered all interior and exterior items from the theatre in a wrecking / salvage sale except for the 600 seats that were donated to a local church. In 1956, the Ritz was demolished in favor of a parking lot.