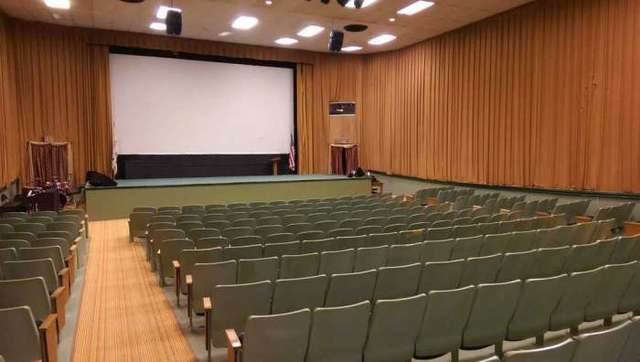 The Arlington Theater was built in the 1950’s. Parents would drop their kids off every Saturday to watch the latest sci-fi and horror films. Kids could stay all day and see the movie over and over. It is now a research testing lab.

Yes,I was one of those tiny kiddees dropped off.Saw swashbuckling,cowboy and g-type war movies.The theater was built just before the “new bridge"was built.Went to the ancient elemetary school just down the road for a few years.It still looks the same.I thought that the last time I was down that road(Univ.Blvd.) the theater was being used as a church.Saw some English movie there around 1956 or 7 that had Rex and his wife Kay Kendall as leads.In my pre-pubescent youth,I thought she was the most beautiful woman I’d ever seen.

Just an update on the address. It was at 1127 arlington north road.

I was a regular at the Arlington, along with a lot of kids from my neighborhood, in the early and mid-‘60’s. I can remember more than one occasion when a stray mom or dad would wander the aisles calling their child’s name because it was time to come home. I can also recall a time or two when the kids in the audience got so rowdy the projectionist would stop the movie, turn on the lights, and cry out from above “Ok, I’m not starting the movie again until y'all calm down.” I remember seeing several of the great Hammer movies at the Arlington— “Brides of Dracula” stands out as one of the scariest (for me, at least). And I will never forget the Saturday when a couple of tame movies were followed by “Night of The Living Dead.” You could have heard a pin drop in between the parts that brought screams from the audience. I mean these were 12 and 13 year olds watching! Triple bills were the usual weekend fare. Oddly enough, I even have a vague memory of seeing the original King Kong at the Arlington. It must have been available to theatres in the early '60’s. The theatre took an unexpected turn in the late '60’s. Inexplicably, it closed one day and remained shut for a couple of weeks. Suddenly, the Arlington re-opened to present “I Am Curious (Yellow)”…a scandel for sure! Curiously, the theatre did not continue in the direction you might have expected…no descent into porn, although I think the weekends of kid’s triple features were over. For a while, they even showed first-run movies and seemed to have found renewed life. At some point, after I was away at college, the Arlington closed. For a while, state offices were housed there, although I could never figure out how they managed to use the space. Perhaps the auditorium was used for storage and the offices were in the lobby. Anyway, I have fond memories of the place. The building is still there, but I imagine many people have no idea it was ever a theatre, though from the side or rear this would certainly be evident.