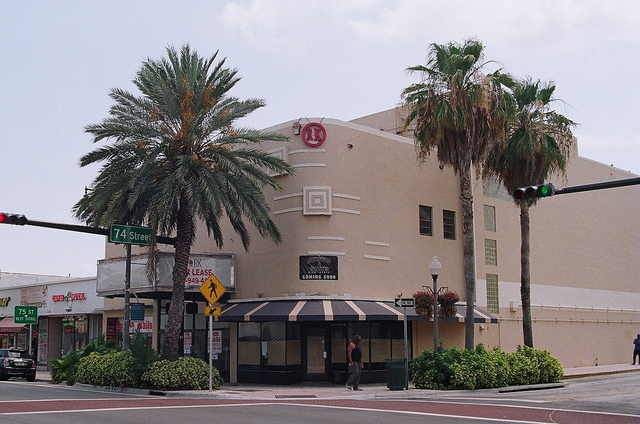 The Normandy Theatre opened on January 28, 1948 with Bob Hope & Bing Crosby in “Toad to Rio”. It was a mid-sized theatre that was located on Collins Avenue directly across from the Surf Theatre in Miami Beach.

By 1951 it was owned by Claughton Theaters (a small chain of theatres in Miami), it was later taken over by the Wometco chain. I remember little about this house except that it usually played first run films. It was closed around 1987, but soon reopened, finally closing in 1989. In recent years it has been a recording studio. By 2017 it was a training center for beauty saloon workers.

I don’t think RKO ever operated theatres in Florida.

I suppose it’s possible that RKO had some kind of deal with Wometco for exclusive early run rights to the studio’s product in the region. RKO had quite a few prestigious theaters in major cities, but I don’t think the circuit as a whole was ever very large. Certainly nothing like Fox or Loew’s or Paramount, or even United Artists.

The Normandy, like the Surf, were not opened by Wometco.

Ah, I didn’t notice the comment saying that Wometco didn’t take over until 1961.

I visited North Beach yesterday. The Normandy is now Sola Salon Studios (as stated on the former cinema’s marquee), apparently a place where beauty salon practitioners can rent space to provide services to their clients.

The business on the corner next to what had been the Normandy’s entrance is now an active restaurant called Burgers & Shakes.

Funny, while walking down the sidewalk towards the building I thought of the footage taken from the angle at which I was approaching of people lining up to see “Star Wars” decades before in the Youtube video mentioned in aeterna’s August 1, 2017 comment. …. I crossed the street to look at the former Surf Theatre, then walked south again. As I reached the corner across from the Normandy a couple appeared from my right and the man was wearing a shirt with a depiction of Darth Vader’s mask.

It did close for a short period of 1987 (see the flashbackmiami link) but it was reopened and soldiered on at least until the early part of 1989. If I recall correctly, the last film screened was “Naked Gun”