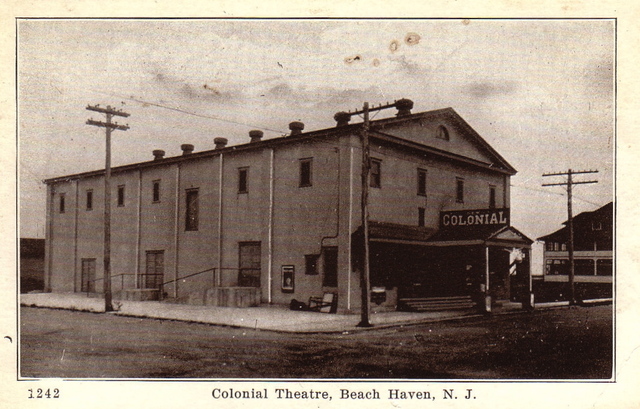 Opened July 4, 1922 as the New Colonial Theatre. This theater maintained its original appearance until around 2000, when it closed. It is now a private residence in this beach community.

A Robert Morgan organ was installed in this theater in 1927. These pictures show the progression of the theater through the years:

I actually called 609-492-4450 (the number that I had for this theater) and the owner stated that indeed it had been an operating theater that was recently converted into a residence. Maybe the Hoyts was the last owner?

Meanwhile, Yahoo shows one theater in Beach Haven: the Frank Theatres Beach Stadium 5 at Herbert Avenue and Long Beach Boulevard with a phone number of 609 492-6906. They have the same movies playing there that Digital City has at the Colonial, running at the same times…unlikely. A local paper ran this story re the reopening of the Beach 5, so that is probably the one currently operating.

Opened on July 4, 1922 as the New Colonial on the corner of Bay & Center. This theatre replaced an older and smaller Colonial Theatre on 3rd Street, which was still used in the winters when crowds were smaller. Opened by Harry Colmer and his partner Leon Cranmer (who soon got out of the business). This was a wooden structure. The four sides were constructed in the Firman Cranmer Lumber Yard across the street and hoisted up with pulleys. In the early days before air conditioning, Colmar would use ice blocks and fans to cool the place. Colmar died in 1956 but his family continued to run this theatre and two others until 1964 before selling.