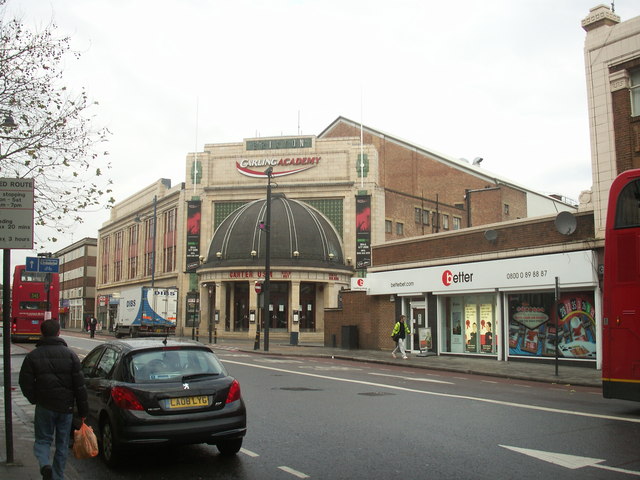 The Astoria Theatre was the first of four Astoria Theatre’s built in the inner London suburbs by independent exhibitor A. Segal. The others being located on Old Kent Road (now demolished), Streatham (now a multiscreen Odeon) and Finsbury Park (now a church).

Located in the southwest London inner-city district of Brixton. This Astoria Theatre was opened on August 19, 1929 with Al Jolson in “The Singing Fool”, and is regarded as the first fully fledged Atmospheric style theatre in Great Britain. This large super-cinema was fully equipped for stage shows on its 40 feet deep stage, as well as films. The interior decorations were carried out by interior designer Marc Henri. There was a Compton 3Manual/12Rank organ which was opened by George Pattman and a cafe/restaurant for the convenience of patrons. An unusual feature was the location of the projection box which was ‘hung’ beneath the circle, giving a straight throw onto the screen.

In December 1930 it was taken over by Paramount Pictures Inc. and they sold their cinemas to the the Odeon Theatres Ltd. chain operated by Oscar Deutsch on 27th November 1939.

In later years it was known as the Odeon Astoria and was closed by the Rank Organisation on 29th July 1972 with “Red Sun” and “The Looking Glass War”.

It was converted into a Sundown discotheque, but this was a short lived (4-months) venture and planning permission was sought to demolish the building, but this was scrapped. The building became a warehouse storing equipment for the Rank Organisation for several years. It was re-opened on 12th March 1982 as a rock concert venue known as the Fair Deal with a concert by UB40, but closed in April 1982 when the operators went bankrupt. It re-opened as the Academy on 7th October 1983 with a concert by the Japanese group Eek-a-Mouse. The plasterwork in the auditorium has been slightly damaged over the years, especially in the early years of its current use as a concert venue when punk concerts were held. The current full capacity is 4,921 as all seating has been removed from the stalls floor. If seating is installed in the stalls the capacity would be 2,391, with 1,083 of these being in the circle. There is standing space for 3,760 in the stalls and 78 in the circle.

The theater became known as the Brixton Academy and was designated a Grade II Listed building on 16th January 1974 and this was upgraded to Grade II* Listed building on 26th March 1990. In 2006 renovation work was carried out to restore the building to its 1929 splendour. In a sponsorship deal with the mobile telephone company O2, it was re-named O2 Academy Brixton from January 2009.

Some unusual shots of the Astoria can be seen in the 1970`s film “Eskimo Nell” namely the projection room, managers office, rear circle,stage, and rear fire escape. Shots of the boiler room are featured in “Confessions of a Plumbers Mate” These were all filmed on location whilst the building was closed to the public. Both films turn up on Ebay quite regularly

Viewed from the balcony during a concert:
View link

an odd find in the London Museum, a magazine called The Astorian – the official organ of the Astoria Brixton – the best south-west… Brixton wonder picture theatre!
presumably dating from around the opening
http://www.flickr.com/photos/woody1969/5447963081/

Unfortunately, the Brixton Academy has recently suffered some damage from a fire. But not to sure how mucg damage. See the BBC report about the fire: http://www.bbc.co.uk/news/uk-england-london-16325908

A repertory, smoker-friendly cinema named Cinema Fumée opened here on 5th August 1994 for a year; the last that was heard of it was its role in a Placebo tour in ‘95. It reopened for a very limited time at Shepherd’s Bush Empire in 1998. https://www.youtube.com/watch?v=UWD0Ol32kcw http://www.independent.co.uk/news/uk/home-news/a-light-in-the-dark-for-smokers-1381966.html

Some mainly exterior photos from 2017 here:–

The Astorian mentioned in one of the entries above was the house magazine of each of the Astorias. I have a copy of the 4th April 1932 vol 4 for the Old Kent Road Astoria found when I had the sad job of going in to aid the closure and clear out. My youngest son is Box Office Manager at the 02 Academy Brixton, its nice to see the building in regular use and the magnificent stage being used for live performance, but sadly the interior is not in good state.