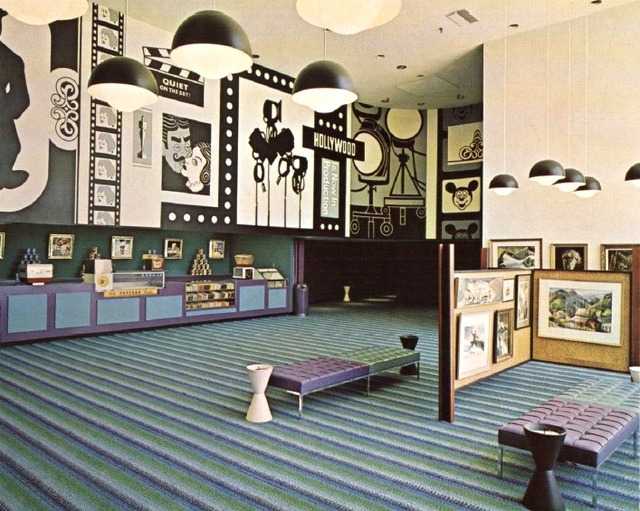 Located in the Northglenn Marketplace in Northglenn to the north of Denver, Co. Loew’s was so proud of this newly opened theatre that they featured it in the company’s 1967 annual report.

The report includes photos of both the exterior and the foyer. Captions read:

“Foyer of Loew’s new NORTHGLENN Theatre in Denver, Colorado is a prototype design incqrporated into many new Loew’s Theatres. A giant wrap-around mural complements the foyer art gallery. Carpeting is both colorful and durable”.

I do not know whether this theatre is still operating. Any further information would be appreciated.

Having grown up in Northglenn from 1977 through 1990, I know for a fact that this theater was twinned and become the Commonwealth Northglenn Twin. There were no other theaters in Northglenn until December 1983 when the Mann Northglenn 6 opened across the street. When it was twinned, I don’t know (sometime mid-70s). I could rattle off about 30 movies I saw there growing up (Battlestar Galactica, Deathtrap, Octopussy…). It was located at the corner of I-25 and 104th Ave in the back parking lot of the old Northglenn Mall. (If you know the area, it was located at the same point where the walkway over I-25 is) It had two large marquees, one next to the theater that faced I-25 and one that faced 104th. In about 1985, the twin theaters were twinned again and the theater (unable to compete with the Mann and no longer under the Commonwealth name) became a four screen dollar theater and even had a dollar video rental store in the lobby. The theater closed around 1990 and was torn down a year or so later, as was all of Northglenn Mall. The odd thing about the theater was that when it was twinned the first time, the seating was left as is, so each of the auditoriums' seating was slightly skewed towards the center wall and not perfectly aligned with the screens. Regardless, I really miss that theater after seeing the photos above (and I haven’t thought about it for years).

The actual address of this theater was 281 West 104th Avenue
Northglenn, CO 80234. Iy seems like this is where I saw movies like “Sasquatch, the Legend of Bigfoot” and “Hanger 18”. Classics.

FYI the United Artists in Berkeley California (now 7 screens) and the United Artists Stonestown in San Francisco (still a twin) were twinned the same way. Weird sight lines and all. Also all the old Century domes in California and Nevada were twinned this way but they had curved screens and that made for VERY terrible sight lines. You literally look at the the wall if you sat on the opposite side!