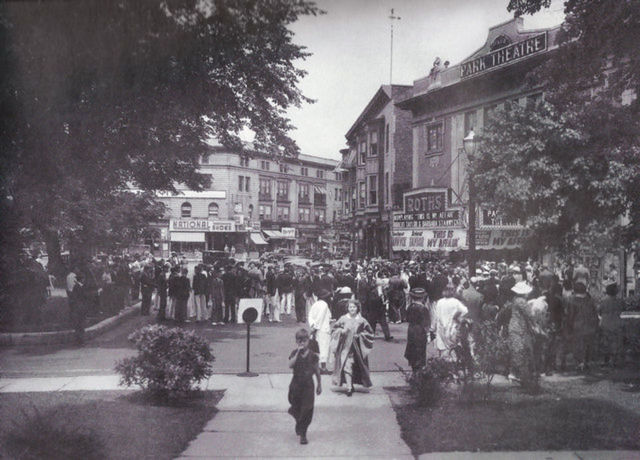 Site of the world premiere of Otto Harbach’s “Katinka” (a musical) on December 2, 1915. This theatre is listed as operating in the 1951 Film Daily Yearbook.

It was demolished around 1970, and an office block was built on the site.

The Park was torn down somewhere around 1970 to make room for an office building call “1776 On The Green”.

Here are some pictures of that office building.
http://www.emporis.com/en/wm/bu/?id=124391

The Park was beloved by us kids in the 1950s for its Saturday afternoon triple features, plus cartoons and shorts, that provided many hours of entertainment for a quarter. My favorite memory is that of seeing “Breaking Through the Sound Barrier,” a movie I really wanted to see badly, as the last of three movies of the day. Unfortunately, it ran past six o'clock, and I had been ordered to be home for supper long before then. During the movie, my father showed up, grabbed me by the scruff of the neck and dragged me home. I did not forgive him for making me miss that movie until I saw it on TV many years later!

David, it was so many years ago I can hardly remember. “Sound Barrier” was a classic, and I would watch it again today if it showed up on TV.
Mike

I worked as an usher at the Park Theater in the mid 1960s. Our protocol after the movie began was to walk down the aisle backward in front of the customer, shining a flashlight down on their path so they could see where they were walking. We had uniforms and everything.

Being originally constructed as a traditional theater, the fly area back stage was enormous. I remember the eerily quiet and abandoned dressing rooms underneath the stage. The stage loading door was large enough to back a truck into, and I was told that in the old vaudeville days when the Park was really hopping, they had all kinds of acts on stage, including a circus show with elephants and all. Just a real classic of a theater, with a large balcony that was hardly ever used.

As a lad, I went with my mother to the Park Theater to see Mary Poppins. It was a nice location, across from the center square, which is locally called “The Green”. Therefore, it would have been correct to describe the Theaters location as being “on The Green”, even though it was accross from it. A large office building was built in it’s place, that was prominantly marked “AT&T”.

Spent many Saturdays at the “Park” theater in the 50’s and 60’s. And the Community but what was the name of the other theater in town ? On Washington Ave across the street for the NY Tea Garden.

glen1949 As I recall, when the original Park Theater closed around 1970, it relocated to Washington Street (not Avenue, which I used to live on), in the spot you mentioned. I think it was still called the Park Theater at that time, but it didn’t last long.