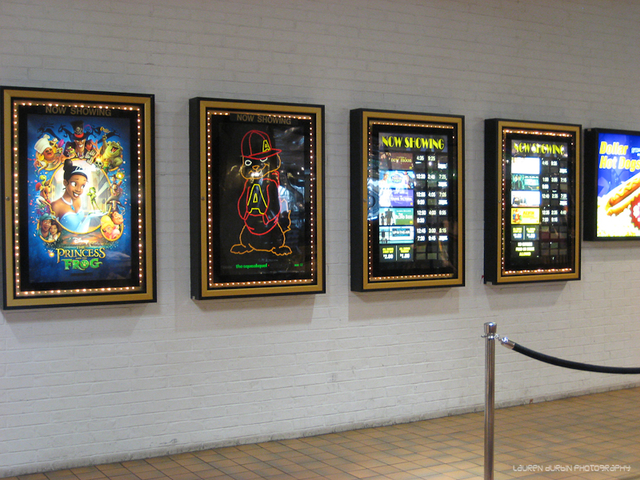 This is a second-run theatre. It’s inside North Park Mall. However, the roof has gone bad and it’s moldy. The first two screens are ok, but the rest will really bother anybody who suffers for allergies.

It is currently operated by Starplex Cinemas/Interstate. The two companies merged a little over a year ago; officially, the Starplex name is used, but the signage probably won’t be changed.

I believe this theatre was originally a Cinemark. In addition to the theatre’s decor being in the Cinemark style, Interstate used to be a subdivision of Cinemark. Basically, Interstate was Cinemark’s discount theatre branch. After Cinemark was sold, Interstate broke off as a seperate company and later merged with Starplex.

The Northpark Cinema 4 was originally operated by Ferris Shanbour. It was not built be Cinemark. Shanbour operated numerous theatres in OKC during the late 50’s, 60’s and 70’s including rennovating the Criterion downtown, the Tower, the Plaza and building the Park Lane, Northpark and Hillcrest Drive-In

During the 70s and 80s it operated under the name Commonwealth. Commonwealth also ran Quail Twin, French Market Twin and several others.

The last time I went to a movie here there were only two of the original screens remaining. I believe on the north side of the theater. The other side was divided into much smaller screens.

Fiddler on the Roof charged roadshow prices when it opened.

The Oklahoman story yesterday reported the North Park has ceased operations (it had a roadside marquee with all the current films it was showing but I had noticed on a recent OKC visit the sign was blank). Page creator may want to change this theater’s status to ‘closed.’

That newspaper article failed to get the correct date of the opening of the theatre. Should have checked the archive!

Ferris Shanbour of Oklahoma Cinema Theatres Inc. opened the North Park Cinema 4 Indoor Theatres on March 15, 1972 in the new-build North Park Mall. The NPC4IT opened with “Fiddler on the Roof,” “Carnal Knowledge,“The Boy Friend,” and “A Man for all Seasons.” The sister cinema was the MacArthur Park Cinema 4 which would had opened in December of 1971.

On June 5, 1981, Commonwealth Theatres took on the Oklahoma Cinema Theatres' four locations including the North Park 4. In October of 1986, Cannon Group’s Commonwealth Theatres were bought out by the United Artists Theatre Circuit and the theatre officially became the UA North Park 4 in 1989. UA dropped the theatre on September 29, 1991 likely at the end of a 20-year leasing agreement.

Like many malls, the 20-year mark was an exodus of original retailers fleeing after leasing contracts ended. Precor Group decided to run the mall theater itself and repositioning it as a $2 venue beginning on October 25, 1991 with “Citizen Kane” as one of the features and its policy of one art title. It became the not-so-imaginatively titled Northpark Mall Theatres 4 - though the space was removed. (The venue would eventually becaome Shoppes at Northpark officially ending the North Park v. Northpark conundrum.)

As part of a mall refresh, Precor decided to increase screen count to seven screens in 1993 relaunching as the Northpark 7. MI Theatres then took on the location in 1995 as an ultra-discount house. Silver Cinemas was next to take on the Northpark 7 in 1997 and closed it May 1, 2000 when it shut down 17 locations. It then found a new operator in Starplex Cinemas.

AMC acquired the location on July 14, 2015 when it purchased Starplex Cinemas. It may have had a brief period as the AMC Northpark 7 but was rebranded soon thereafter as the AMC Classic Northpark 7 running as a sub-run discount house. It closed in August of 2019.