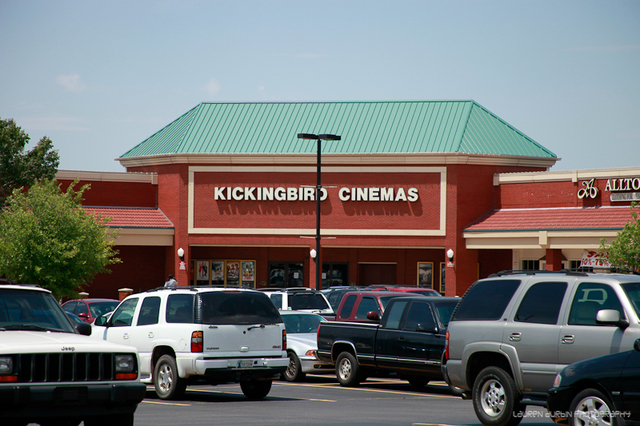 Originally built and operated by the Litchfield Luxury Theatres Ltd. Opening on November 25, 1988 as a 6-plex with 1,420 seats. In July 1994, Regal Cinemas bought out Litchfield and the theatre became part of Regal Cinemas chain.

It was reopened two days later as an independently owned and operated theatre from February 1, 2001. It offers 5.1 digital audio in all 8 screens. In May 2009, 2 Christie CP200ZX digital projectors were installed, both of which are outfitted with RealD 3D.

I don’t know why anyone be interested in this theater since it is the usual modern monterplex; however, I will give some details since it is already listed. The theater is clad in gray brick and is off set in a strip mall. The auditorium is rather plain featuring nuetral colored tile on the floor and curtains on the walls. The most best feature of the theater is the fact it is very clean—-a rarity in Oklahoma monsterplexs.

There are lots of reasons some might be interested in this theatre! First and foremost, it is perfect for people who want to support the local small business in their community. It’s like choosing to go to the local market in your neighborhood, owned by a neighbor, than opting to go to Wal-mart or some other huge corporate owned store, just for lower prices, or notoriety. This theatre, is indeed clean, and usually shows a great variety of movies. Plus, at Kickingbird, you can go out for buy your wife flowers, go out to dinner, see a movie, all at the same place without moving your car.

As far as Oklahoma’s other ‘monsterplexes’, most of them would be cleaner if unruley teenagers (or immature adults) would stop throwing their trash and spit in the floors.

Anyway, this is a great family theatre, and recommended highly in support of the Edmond community.

Prof quality pix of the Kingkingbird Cinema can be viewed on this site …
http://www.roadsideoklahoma.com/node/342

Unfortunately, the roof was ripped off of the Kickingbird Cinema during storms that swept through in the early hours of 8/8/11 which left roof damage and water damage. The theatre had just recently upgraded all of their projectors to digital. Repairs are expected to take at least one month.

Why is called Kickingbird Cinema(unusual name!)? 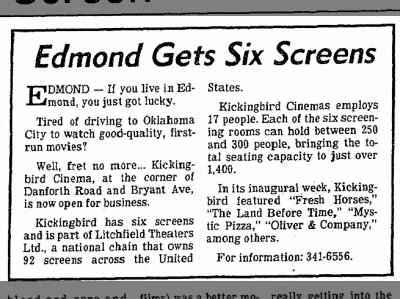 Icon Cinemas is just brought the building and expect to reopen it soon according to their site.

The original architectural design was by South Carolina-based Hiller & Hiller.

Carolina-based Litchfield Theatres Circuit, formerly Fairlane Litchfield, decided that the time was right to move into the Oklahoma City market in the 1980s. And the move was a good one because the town was overbuilt with aging twin and four-plexes without a true, modern destination theatre. Litchfield began in Edmond with this venue, the $1.4 million, 1,548 seat Kickingbird Cinema 6. The Kickingbird Shopping Center was built in 1983/4 near the early 1970s' era Kickingbird Golf Course and Kickingbird Estates.

Even though Litchfield launched here as a six-plex, the original design allowed for two more additional auditoriums if business conditions warranted their construction. On February 2, 1994, Regal Cinemas bought out Litchfield and the theatre became part of Regal Cinemas chain. The next year, Regal was the company to add the two screens from the Hiller & Hiller drawing and making it the Regal Kickingbird 8.

In the fall of 1995, Regal added on two screens to make it an 8-plex. But that may have been too optimistic and Regal closed up shop on January 28, 2001. The theatre continued an independent run under Kickingbird Cinemas Ltd. which had originally conceptualized the theater. On August 10, 2011, the theater’s future was jeopardized by a major wind storm that toppled its roof. However, the theatre was repaired and continued operations that same year.

The Kickingbird closed after shows on March 17, 2020 for the COVID-19 pandemic. During the year between the start of the pandemic and March 16, 2021, the theatre remained closed and new operators were sought. Icon VIP Circuit picked up the venue that summer with a November/December opening planned that year.