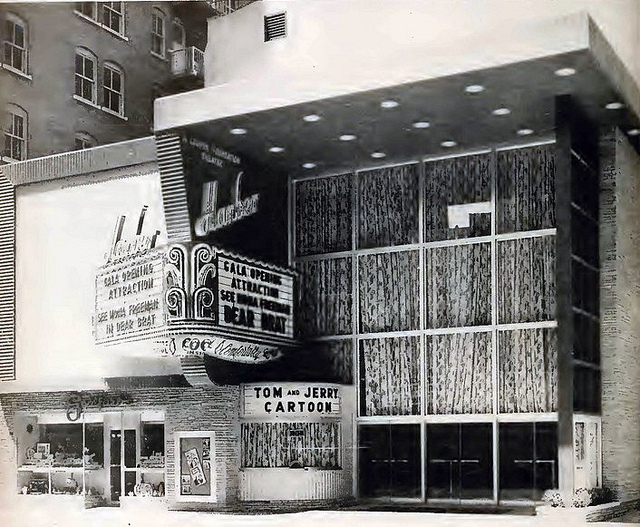 On December 13, 1915, Paramount Pictures Inc. opened their modish Craftsman/Mission style Liberty Theatre, complete with a billiard parlour on the spacious mezzanine. A new innovation resurlted in supurb picture quality - the projection booth was located on the ground floor.

When Paramount almost went bankrupt in the mid-1930’s, Warner Bros. took this opportunity to seize control of the 1,700-seat Liberty Theatre, which was on the same block as their Warner Theatre & Midwest Theatres.

Ownership again changed to Cooper Foundation Theaters Inc. in the late-1940’s, and the original facade and lobby were razed to make wasy for a sleek new look. The auditorium was also modernised, all to the plans of architect’s Boller & Lusk, with decorations by interior decorator Hanns Teichert. At this time it was renamed Harber Theatre.

Cinerama equipment was installed around 1953, half of the balcony was blocked off to reduce seating capacity down to 1,100. On June 19, 1958 it re-opened as the Cooper Theatre with “Windjammer” presented in Cinemiracle.

Thoughout its long life, this movie palace remained profitable, until know-it-all Urban Renewal said the old downtown movie theatre had to come down in the mid-1970’s…..and it closed September 2, 1975, and was razed in 1976.

Wow this theater looks so much like the Gateway theater in Ft Lauderdale. Pull it up and see.

See 1925 Liberty Theatre Ad for “Phantom of the Opera” in Photo Section with some bargain prices.

One of the many restorations of Gone With The Wind played there, I believe in 1966.

Closed for good on Tuesday, September 2, 1975 (ad states “Ends Today!”) with a new film that hadn’t even entered general US release yet, Fred Williamson and Lee Van Cleef in TAKE A HARD RIDE (Opened in Oklahoma City on Wednesday, August 27 here and also the Tower and South Park Theaters. Official 20th Century Fox release according to IMDB was over two months later on October 29.) and the 2nd feature GORDON’S WAR (1973). [Source: Oklahoma Journal]