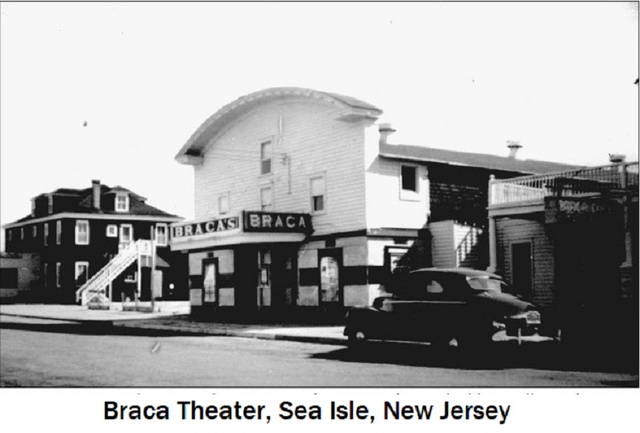 The Braca Theater in Sea Isle City was opened in 1916. The silent movies were run manually by John and Louis Braca, while Philomena “Minnie” played the piano for the 7 and 9 shows, Thursday was “Bargain Night”: two movies, cartoons and free dishes!! By 1925, the movies were run by machine and around 1935, the “talkies” came in. Mary Braca Gibson mentions how wonderful it was to “see movies and hear sound”. The serials were in vogue. Many was cashier at the Braca Theatre and Arthur, Henrietta’s husband, was the projectionist.

In 1940, the Braca’s bought the Madelyn Theatre and fishing pier for a corporation of which Mr. Cini was a member. Gar Gibbson bought and selected films and managed both theatres. Rita Braca Tracey was cashier of the Madelyn Theatre and operated the Candy Box. The movie on the pier was rebuilt twice after the hurricanes of 1944 and 1956 the fishing pier was rebuilt three times. The storm of 1962 destroyed all the beachfront property, including the bowling alley, Penny Lynn Shop, the Pier and Popcorn Store operated by Jack and Jeanette Braca Gibson