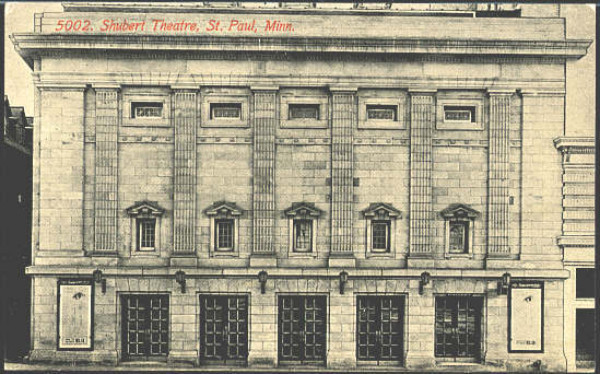 Originally built as the Sam S. Shubert Theater in 1910, as one of four memorial theaters across the country built by the Shubert family in memory of their late brother Sam, this theater was modeled after Maxine Elliot’s Theatre in New York City, built two years earlier (razed in 1960) and designed by the same architectural firm, Marshall & Fox of Chicago.

The Sam S. Shubert Theater was called ‘one of the most splendid-looking theaters in Saint Paul’ by papers when it first opened. Its sandstone facade was designed in the Palladian style, with sets of columns and pediments above the main entry. The interior was highly elegant, reminiscent of the opera houses of the turn of the century era. Its accoustically superb auditorium could seat almost 1,000, in burgundy colored seats, and eight boxes curved towards the large stage, decorated with gilded plasterwork and the same velvet curtain cloth used for the stage curtain. The proscenium arch reaches 30 feet high and stretches about 40 feet from edge to edge. Backstage are a green room and five dressing rooms, one with a wall signed by John Barrymore in the 1920’s.

In 1933, the legitimate playhouse was converted into a movie house called the World Theater, as it played mainly foreign features at that time, but later played first-and-second-run features.

In 1986, the World was restored to its 1910 appearance, and began to be used for live radio broadcasts of Garrison Keillor’s popular ‘A Prairie Home Companion’ radio show. A Mighty Wurlitzer organ, once in the Texas Theater in San Antonio, was also added during the restoration.

In 1994, the theater was renamed again, this time in honor of Saint Paul native F. Scott Fitzgerald and is home to Broadway shows, concerts and lectures. It is now the oldest surviving theater space in downtown Saint Paul.

If anyone would like to see some historical photos, check them out:
View link

This is the theatre that Brian Williams broadcast the NBC Nightly News from a few weeks ago! I wonder if Brian saw Ben, the ghost!?!

Yes this is the theater that Brian Williams did NBC Nightly News.
No he did not, Ben we think finally crossed over, as no one has had any contact or sightings with him in a couple of years.

Glad to read that Ben is now at rest and that the theatre lives on today! When Brian broadcast the Nightly News from the Fitzgerald I just had to find out what theatre and where so wrote NBC and got my answer within a few days! :–)

No one seems to have mentioned yet that this is where, appropriately, the current Robert Altman movie A Prairie Home Companion was filmed.

Yes. Just came back from seeing it. The mighty Wurlitzer is beautiful, they showed it in a scene. The movie didn’t show a great facade of the theatre whatsoever which is what I was waiting for, however there are other great shots of the various rooms, but no great big shots. It makes it seem cozy during the movie. There is a bust of F. Scott Fitzgerald in the luxury box.

Just saw “Prairie”. The BEST part were the shots of “The Fitzgerald” According to David Naylor’s “Great American Movie Theatres”…… The Architects were Marshall and Fox.

Looking at the aerial view found on google maps, it looks as if there might be another auditorium atop the six story office structure that houses the Fitzgerald Theatre lobby. Is this assumption correct?

As far as the “second auditorium” goes, I’ve never heard of it.