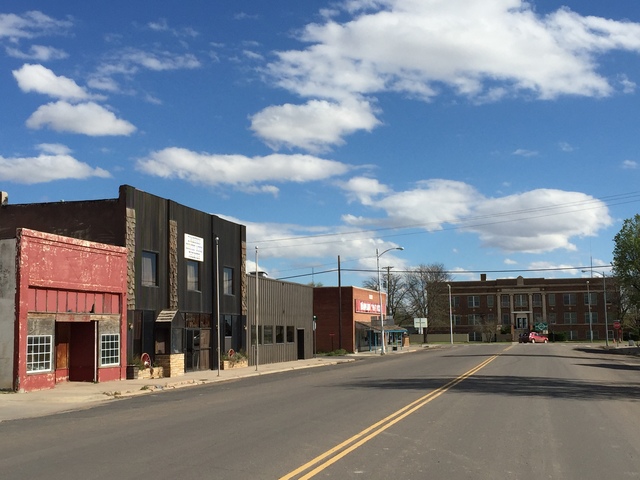 The Palace Theater was opened on March 21, 1930 with Victor McLaglen in “Hot for Paris”. It later became the Camelot Theater which was closed in 1999. Since at least 2016 it has operated as the Cimarron Country Music Theatre.

Good news! The Camelot is now open. It was purchased by the same people who own and run the Capitol in Springfield, Co. They do a wonderful job at the Capitol so I’m sure the Camelot is in good hands. The Camelot’s interior decoration is a castle motif in keeping with the name. We will post more information concerning the history of the theatre as well as a detailed description as soon as we visit this theatre.

My wife and I recently visited the Camelot. It was built in the 1930’s and was originally known as the Palace. During the 1970’s, a former owner spent a reported 200,000 dollars remodelling and updating the theatre. However, the owner had embezzeled the funds from his employer and was caught before he could reopen the theatre. His employer owned the theatre for a time before selling it to a couple who ran it until 1999. The theatre is incorrectly pictured on Cinema Tours. The confusion was probably born in the fact another business had a small suit of armor in front. The inside of the Camelot is quite interesting. It features a sitting room with a lion head motif furniture as well as a life size suit of armor standing guard in the entry. In addition, the auditorium features flags hanging from the walls in the round table fashion. The stage is fashioned to resemble the top of a castle and is flanked by two drawbridges. Two glassed in cry rooms are designed in the manner of ancient thatched huts. The 1970’s rebirth included an automatic curtain, $22,000 (1970’s dollars) projector as well as new seats.

Sorry… I accidently submitted it too soon… Anyway, the restrooms are quite cool, too. The ladies restroom features four seperate rooms decorated in the coolest 1970’s version of Camelot——flocked wallpaper and green fixtures. The theatre is well worth a visit for its great interior. The current owners are also very nice and keep the theater in great condition. We have current pictures to post as soon as possible.

I have a correction to make. The pictures on Cinema Tour are the correct ones. The building looks better now, however. Sorry for any confusion.

Look into this link for info on silent movie cowboy star Jack Hoxie and his connection with Boise (pronounced-boys) City, OK;
http://www.ptsi.net/user/museum/hoxie.html

From 2010 an image of the Camelot/ Palace Theater building in Boise City.

Looks closed by the time the Googlemobile passed it by.

The Cimarron Country Music Theater now occupies the former Camelot Theater. The lobby looked clean and ready for customers, although there was no venue information (web site, phone number) or posted schedule. New pictures posted in the Photo section. May 2, 2016.

The March 21, 1930 opening of the Palace Theatre marks the first talkies for Boise City launching with “Hot for Paris" starring Victor McLaglen. The theatre vanquished the Ritz Theatre which would close four months later.