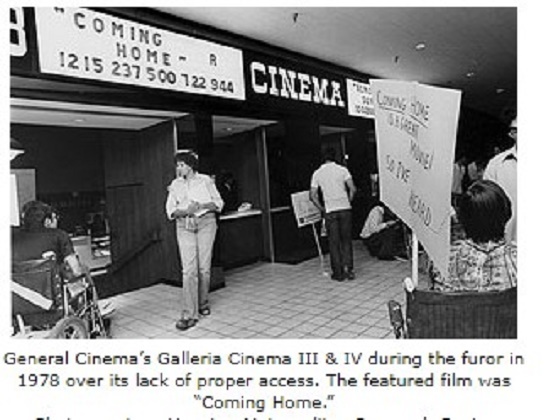 The Galleria was actually two separate twin cinemas, each with its own box office and lobby, situated at different sites within this sprawling shopping complex. The Galleria cinemas were among the best of the General Cinema’s Houston properties (the original Meyerland 1 & 2 took top honors).

I’m not certain when the first two screens were built — I believe it was in the early ‘70s along with the rest of the mall. In the spring of 1977, it was the theater at which Star Wars was shown, playing there for well over a year (I saw it first at the second feature of the second day, as well as the one-year anniversary in May of 1978). The mall featured a skating rink on the lowest level of the mall, with the theater located at one end. During a very hot summer, it was actually rather pleasant to wait in line with the cold wafting off the ice. There was no “food court” as such in the mall, but several of the restaurants actually started take-out menus designed for eating while seated on the floor of the mall as the line snaked around the ice rink and back again.

In late 1977/early 1978, the mall expanded with a new wing that connected to a new hotel (there was already one at the other end of the mall), shopping and office space. They were open by May of 1978 because my senior prom was held in the new hotel (ironically, my junior high prom was held in the other hotel in the complex) and we wandered around the new section, which wasn’t particularly populated at that point. The cinemas themselves opened that summer, I believe, with Star Wars moving over to the two new screens.

I didn’t see that many movies in the III & IV because I moved from Houston within two years, but they were very nice, with a fairly small lobby but nice auditorium. As an added bonus, the theatres were tucked into a corner of the mall that just happened to be directly by an entrance to one of the parking gararges. There was also a very expensive chocolate store directly across from the box office.

These theaters have been closed and have long since been gutted for other uses and to make way for additions to the mall.

I & II opened in 1970. Five Easy Pieces, with Jack Nicholson, sizzling in his first starring role, after his first oscar nomination, for Easy Rider—was one of the 2 films showing.
I saw some kind of invitational sneak of Star Wars there—one day before it opened.
III & IV had a Mickey D’s across from it, too, & it also was near an exit to the parking garage.
GC put this great old manager, Les Coulter, in charge of all 4 audsitoriums, which, as you said were on diff floors of diff segments of the Galleria. ( continued )

Poor Les, who wasn’t a young man, did a LOT of walking. Because he WAS so good—he couldn’t keep a decent assistant manager, either. He’d train them so well, that the company would transfer them out, to other assignments—as soon as he got them thru training.
I’ve lost track of him. Last time I saw him—he was managing a $ cinema—years ago.

general cinema galleria twin theater opened november 17,1970. the two films that open were five easy pieces with jack nicholson and karen black the other film was scrooge starring albert finney. I remember seeing a sci fi movie universal pictures andromada strain starring artur hill,james olsen ,kate reid ,david wayne. the date was febuary 8,1971. in the lobby for a movie promotion at the concession counter the theater was selling duplicate red keys used in the film. the red keys hung around your neck on a chain. I april 1973 I saw soylent green another sci fi film starring charlton heston. other films I saw there were jaws 1975, star wars 1977.out of africa 1985.

I saw Star Wars there on its opening weekend in May 1977.

Thanks Rebstock for that behind the scenes look at the movie business during the 1970’s. I do recall that Star Wars opened up at different months during the summer of 77 depending on your location. Also, the lines that would wrap around the block to buy tickets in those pre-internet days. The movie business has changed quite a bit since those times.