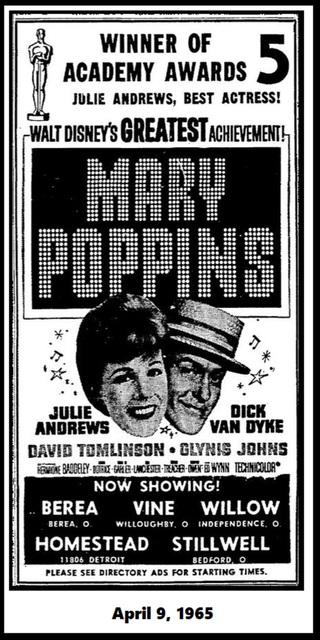 The 1,600-seat Berea Theatre was built in 1949 and opened on November 23, 1949 with Yvonne DeCarlo in “The Gal Who Took the West”. It was closed in the early-1990’s. Originally an independent, and later run by Loews and Cleveland Cinemas before closing for good. Theatre was triplexed on December 20, 1978. The marquee looked similar to the former Madison Theatre on Madison Avenue in Cleveland. Later, the theatre was demolished and the University Hospital’s Berea Medical Center was built on the site.

This was a very nice theatre with a huge screen. i saw BEN HUR and WEST SIDE STORY here with totally packed houses. They’d drop us kids off, and pick us up later after the show. ON THE BEACH, many others. It did have a great wide marquee.

In the 1950’s and 60’s It was one of four suburban theaters to show single features right after their first run in downtown Cleveland. The others were its twin in Willoughby-the Vine and also the Stillwell in Bedford and the Willow in Independence. These theaters had late shows on Saturday nights with the last showing about 11:30 pm.

The Berea Theatre was featured in an article by Hanns Teichert in Boxoffice, July 1, 1950. The article credited the design of the house to Paul Matzinger, of Matzinger & Grosel. The Art Moderne decor was by Rex M. Davis of the Teichert Studios.

In the night photos above it looks like most of the neon was no longer working. The underside of the marque originally was fully light with neon tubes in various shapes. It created a bright and very theatrical front to the theater. Also, there was a lot of flashing neon around the reader board. Sad to see it in such poor repair.

Tlsloews, another LOEWS theatre.“INCHON” and “GAME OF DEATH” two stinkers one ripping off GEN.MacAuthur and the other a Bruce Lee mess.

I suppose, since Loew’s once operated it, it counts as a “Loew’s” theater, but for those of us who are or were Clevelanders at the time, it was basically a Loew’s-in-name-only.

The last truly genuine Loew’s built and operated theaters were Loew’s East in Richmond Heights and Loew’s West in Rocky River both of which opened in 1966. After the closing of the last of its former great downtown theaters (Stillman, State, and Ohio), Loew’s apparently wanted maintain a strong Cleveland presence, and so acquired a small chain of upper tier theaters around 1975 located in the suburbs of Cleveland which (if memory serves) included the Berea, the Yorktown, the Stillwell, the Riverside, and two fairly new theaters, the Showplace and the Village. When these closed over the next twenty-five odd years or so, the famed Loew’s name once synonymous with high class moviegoing in the Forest City, disappeared.

Thanks CWalczak.First I have heard of LOEWS BEREA.

The “BEREA” letters have two colors of neon, green and bright pink. Originally the flashing sequence was green, then green-pink, then pink, then back to green. Sometime perhaps in the 1980’s that was modified to continuous pink with slow flashing green, then at the very end to ‘no neon’ backlit with spotlights which looked horrible. There was three flutex glass panels on each side of reader board, the center seen in the night time shot later covered with ‘LOEWS’ signage. These had vertical neon tubes of several colors actuated with a fast scintillator making a vibrant, eye catching ‘color organ’ display. If there was any other animation on this marquee I cannot recall it, as I did pay close attention. It really was the dominant visual landmark in Berea in it’s heyday, nothing approached the visual impact at night when driving up or down Front street. Somewhere there is a night time long news shot from across the street showing the marquee animation which aired quite a bit at the time the projectionists strike began (late 70’s – early 80’s?), which then went on for years. Berea residents no doubt recall the single picketer who picketed for years every weekend night, and in most weather. CW