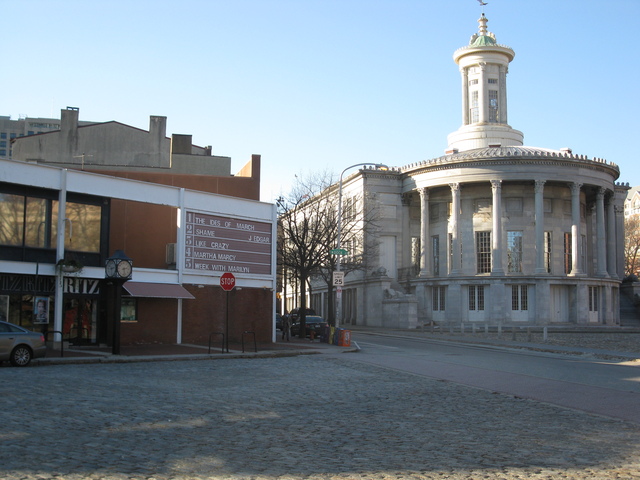 The Ritz 5 Theatres shows a mix of American and foreign films, some with English subtitles.

Your right TheAlan Budco never owned this theater, they owned the Old City Twin which wasn’t far from the Ritz 5 which was taken over by the Ritz owner from AMC when AMC purchased the Budco chain.

Right, Budco never owned the Theater, but Variety used to say, in the 70’s, that Milgram Theaters were the owners when they would report grosses, much to the surprize of Mr. Posal. “Budco like” means that, the theater was twinned by building a wall in the center, and not adjusting the seats, which after nearly 30 years, remain on a slant. I try to avoid films there unless they play in the bigger theater.

Last June the Ritz 5 celebrated its 40th anniversary. It’s aging but management is still doing a great job running it, I now assume that it will never be replaced by a more up to date cinema. In New York Landmarks Sunshine Cinema is being upgraded, why now here?

I know I am beating a dead horse but, the Rize Five really needs to be replaced. This theater is so outdated and uncomfortable I can’t stand going anymore unless the film is in the big theater. Yesterday I was forced to see ELLE there, the film was to play as a sister opening at Carmike Ritz 12 in Voorhees, for whatever reason, it didn’t open. I was looking forward to seeing this amazing piece of French Cinema, and it didn’t disappoint. Unfortunately, this did not play in the big house but in the worst theater that was there, and what happened to the disclaimer about talking during the film? To old ladies sat behind me and chatted away during the entire film, I shushed them once they stopped for a while and continued. I only attend this theater when I have to.

Went here the first time tonight, I live in NY so it’s not likely for me to go again or consistently enough to give a thorough write-up. My feature was in #4 and ouch my back. The seats aren’t exactly comfortable, which is my only gripe. Picture and especially sound is a step down from NYC’s Sunshine, I even heard woofer distortion in the Landmark logo. But I’d be damned this is the cutest movie theater I’ve been to.

It’s a place to see a movie, and less of an experience.

For some months, there’s been a once a week evening classic. I’m told by a friend who attended that last night’s Young Frankenstein was packed, the large auditorium # 1 filled except 1st 3 rows. These are shown as theatrical quality 2 k.

The Philadelphia Inquirer in print today has the obit of the sculptor of the art seen on the theater facade in a 2017 photo that I posted.

NOT ALL OF THE ARTICLE, BUT MUCH- William P. Daley, 96, an internationally celebrated ceramic artist and art professor, died Sunday, Jan. 16, of heart failure at his home in Elkins Park.

Mr. Daley was part of what is known as the American studio craft movement, a shift that took root after World War II during which artists rejected mass production of both crafts and art and combined the two. Mr. Daley worked most often in clay — he called it mud — and many of his pieces, true to the movement, are equally functional and inspiring.

As an example, Mr. Daley noted in a 2010 Inquirer video that a cistern he created not only collected water but was specifically designed to convey “the idea that rain is a sacred event.”

“Craft is absolutely vital to making art,” Mr. Daley said in the video. “But if it’s only craft, it can’t be art. … All art has to be useful either psychically, intellectually, or emotionally.” In addition to his many signature pieces of large unglazed stoneware vessels, Mr. Daley created screens, walls, fountains, and other objects. His work is shown in museums in Philadelphia, New York, Washington, London, the Netherlands, Russia, South Korea, and elsewhere.

His large-scale architecture can be seen, among other places, in Philadelphia at Landmark’s Ritz Five movie theater on Dock Street, and Germantown Friends School on West Coulter Street; and in West Chester at the Westminster Presbyterian Church on West Pleasant Grove Road.

Elisabeth Agro, curator of American modern and contemporary crafts and decorative arts at the Philadelphia Museum of Art, said Mr. Daley “profoundly influenced many in the field of American craft” and “engaged in deep contemplation of mankind’s ‘inner spiritual grace.’”

Ruth Fine, former curator of special projects in modern art at Washington’s National Gallery of Art, said Mr. Daley was of “immense importance in [Philadelphia’s] attention to the craft-based arts.”

Mr. Daley also taught in the crafts and industrial design departments at Philadelphia College of Art, now University of the Arts, from 1957 to 1990, and dozens of his students went on to distinguish themselves in ceramics, glass, furniture, and design.

William R. Valerio, the director and CEO of Philadelphia’s Woodmere Art Museum, called Mr. Daley “a generous teacher who made an impact on the thinking of generations of artists.”

Mr. Daley held dozens of exhibitions, received many awards for both his art and teaching — including the 1991 College Art Association of America Distinguished Teaching of Art Award — and wrote for his own website. He and Helen Drutt were founders of the Philadelphia Council of Professional Craftsmen, and the Helen Drutt Gallery in Philadelphia was his primary dealer.

He sometimes even encouraged those viewing his work to handle the pieces to better embrace their emotional impact. “All art is that connection between one human being and another, a kind of communication,” he said in 2010.

In 2009, Inquirer art critic Edward J. Sozanski wrote that “the physical presence of [Mr. Daley’s] work is forceful and inescapable” and that “one is able to appreciate both the formal ingenuity and seductiveness of the compositions and the perceptual dualities they generate.”

Mr. Daley was born March 7, 1925, in Hastings-on-Hudson, N.Y. He served in the Army Air Corps during World War II, was shot down on his first mission as a tail gunner, and spent a year as a prisoner of war in Turkey and Germany before being liberated.

The only decent auditorium is Screen A(Theatre 1). I just uploaded photos of the large and smaller screens in the photos section from my visit in 2016

I saw “The French Dispatch” in Theater A. Definitely the best screen but needs a redo. New seats at least. Seems the current owner of Landmark should realize this. The Ritz Five is a far cry from when Ramon Posel owned this theater.