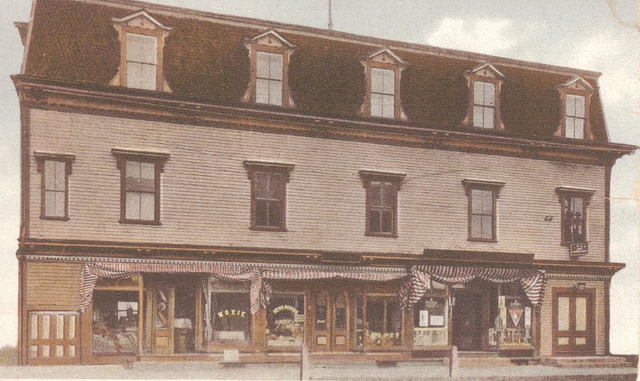 The Music Hall in the village of Pascoag in the town of Burrillville was a multi-function facility. It was built by the International Order of Odd Fellows of Pascoag in 1875. The new hall was dedicated on December 13, 1875 with a ball and supper. Municipal directories of the 1920s and 1930s list it as a theatre where moving pictures were shown. It was a different facility from the nearby Star Theatre. The Music Hall was totally destroyed by fire on May 8, 2002.

Origins of the Music Hall.

From the website “History of the State of R.I. – History of Burrillville.”:

“Granite Lodge, No. 33, Independent Order of Odd Fellows, at Pascoag, was instituted Jan. 2, 1874, with fifteen charter members. First officers were: N. G., William Nugent; V. G., M. Wood; R. S., H. A. Potter; Treas., A. C. Sayles. The first meetings were held in the Old Hotel hall. The building at present occupied by the order was erected in 1875, at an expense of $10,000. It is a three-story building, about 40 x 70 feet. Upon the first, or ground floor, are three fine and commodious stores, — the first occupied by S. E. Miller as a drug-store and post-office; the second is occupied by D. S. Salisbury as a dry goods and clothing house; the third is occupied by a news-room and barber-shop; the second story is used for a public hall, known as Music Hall. Here are held all public gatherings, and the citizens manifest a considerable degree of interest in this fine and commodious hall. The third story is occupied by the members of the order. It is elegantly furnished with appropriate lodge-furnishings, and both officers and members feel a just pride in their worthy institution.”

1936 photo of entrance during Tercentenary.

In the third photo note that the poster showing the Fritz Lang movie Fury with Spencer Tracy clearly verifies that the Music Hall was a movie theatre.

The theatre eventually closed and the Star Theatre took over the function as the main village theatre. The Music Hall building became Berk’s Department Store. Then it remained vacant for 10 years until the 2002 fire destroyed it. In 2003 Jake A. LaFleur pleaded no-contest to a charge of arson for having set fire to the building. Plans are currently under way to construct a memorial to the Music Hall at the same site.

I spoke to a very old gentleman at the hardware store in Pascoag today. He pointed out exactly where the Music Hall used to be, a spot that is now a vacant lot since the theatre’s destruction by fire. He remembered going there to see movies as a youth in the 1940s and enjoying the westerns that were often shown there. He recalled a barber shop and ice cream store in the building. The auditorium was on the second floor.

Here is a link to a drawing of a proposed Music Hall Pavillion to be erected in the vacant lot where the original Music Hall once stood in Pascoag.

There are references in lists from around 1915 to a theatre in Pascoag called the Empire. Could that have been the Star or the Music Hall, or was it another location?