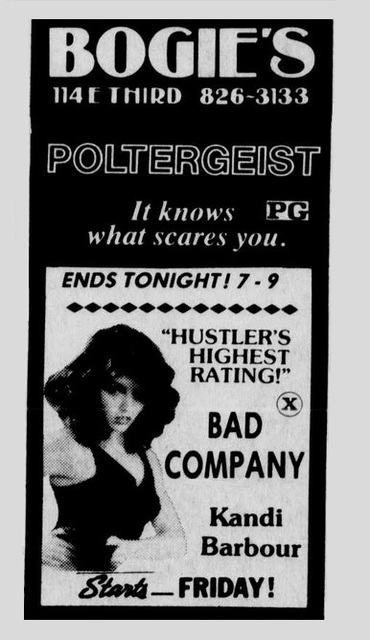 Bogie’s Theatre could not have been in the residential district along Southwest Boulevard, but there are conflicting addresses from other sources. I’ve found references in the Sedalia Democrat giving the Bogie’s Address as 114 E. Third and 114 W. Third. Meanwhile, CinemaTour says that it was at 212 W. Main.

I’d say the correct address must have been 114 E. Third, as a June 26, 1983 Democrat article said that Central Press, formerly located at 116 E. Third, was relocating across the street, its building having been damaged by the March 5 fire that destroyed Bogie’s Theatre next door.

Was there someone called Bogie?

The theater was probably named for Humphrey Bogart.