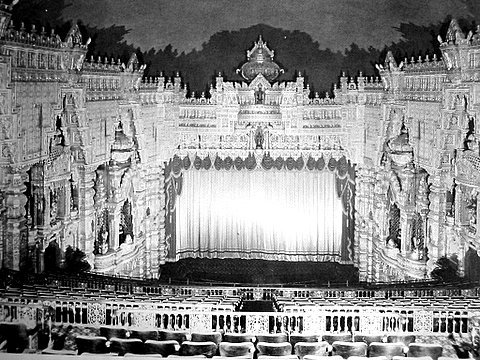 The Loew’s 72nd Street Theatre was one of the few Atmospheric style theatres architect Thomas Lamb ever designed (in collaboration with John Eberson). Coming at the end of the picture palace boom, the Loew’s 72nd Street Theatre shared some similar touches with other Loew’s palaces but its style and heart were all its own. It was opened on February 20, 1932 with Marie Dressler in “Emma”.

Sadly, the 72nd Street Theatre only lasted 29 years and closed on December 31, 1960 with “The World of Suzie Wong”. In early-1961 the theatre was razed to build an uninspiring apartment building. This jewel of the Upper East Side was gone forever and in its place, Loews built one of many basement theatres in New York City.

An unadorned and much smaller descendent of the intricately designed, palatial 72nd Street Theatre, the newer theatre was also a single screen house.

Today, there’s no hint that on this block one of the great movie palace treasures of all time once sat here.

i just became aware of this website like a month ago. so i have
3 quick questions for devotees of the late Tower East.
none of the photo links for the old Loews 72 St. work. how
can i see photos of it?
the Tower East was built as a movie theater with no freight
entrance so how in God’s name will convert it into a super-
market?
*also while we all lament the passing of a grand old movie theater
like the Loews 72 Street we must not forget that these grand old
theaters simply became economically unfeasible. :–(

Does Loews still have the large auditorium decorated in red by the front of the complex? Is there a loews company anymore? Thanks

I believe the decorations are intact, but the original seats have been replaced. Loews Cineplex merged with AMC Entertainment in January 2006, they kept the AMC name for the combined company & they were bought by a Chinese Company named Wanda Group a few years ago. Also as they renovate the former Loews theatres they are replacing signage with the AMC nameplate, like on 84th Street.

A typo in my latest post. Not backing asks should read not backlit as. Sorry for the typo

Loew’s 72nd Street had an “atmospheric” auditorium with stars and floating clouds, but Loew’s 175th Street and the similar Syracuse site did not.

I heard a rumor it had a small area used for patrons with dogs. Is this true?