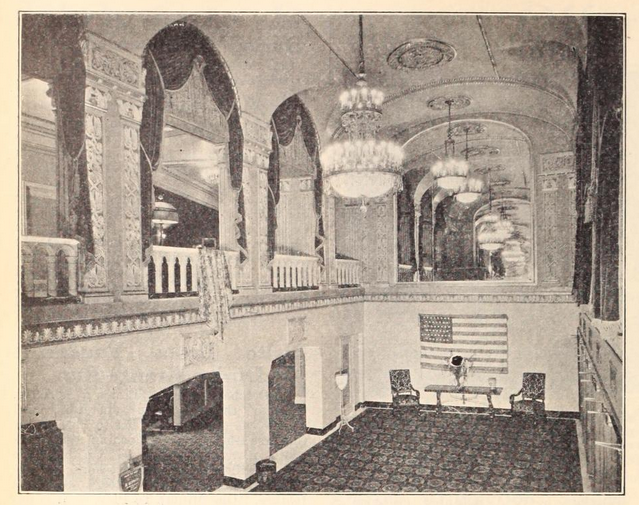 The Capitol Theatre opened on September 6, 1926 with Bebe Daniels in “The Palm Beach Girl” plus 5-acts of vaudeville on the stage. This was the largest and most ornate theatre located in the area with 2,389 seats, 1,145 located in the orchestra, 976 in the balcony, 236 in the loge section and 32 box seats. All this was contained within a large five-story building with multiple storefronts facing the main street of the city. The exterior was done in light tan brick, had a large square shaped marquee and narrow vertical spelling out “Capitol Theatre”. The auditorium had a rather ornate balcony railing and large painted murals on the side walls. The organ (possibly a Kimball organ) was opened by organist Edward Benedict. Mona Jones became resident organist.

Many famous actors and actresses played on the Capitol Theatre stage. Some of these included Fred Astaire, George Burns, Gracie Allen, and Milton Berle.

The theatre switched to an all film policy in the 1930’s and was the most popular theatre in the city for many years. It began to suffer with television in the 1950’s and management tried many ideas to once again fill the seats. The theatre closed officially in the spring of 1963 and was sold later that same year.

The lobby was converted into storefronts, while a neighboring furniture store extended its second floor showroom into the area in front of the balcony and over the stage. Those familiar with the theatre building often remarked how the balcony was left totally intact, complete with seats and chandeliers, now facing the new drywall put up by the furniture store.

The building survived like this into the mid-1980’s when a fire destroyed it all. A one-floor office building now sits in its place.

Here is a photo showing the original marquee and exterior.

My father,Tony DeCosmo,was the Chief Projectionist at the Capitol Theater for many years and worked there till it closed in 1963.I remember the ladder that lead to the roof of the building.We watched John F. Kennedy campaign in front of the Altamont Hotel (just a few doors away) from the Capitol roof.I believe the company that actually owned the theater had some sort of clause that prohibited the building’s use as a theater after the Capitol closed.In fact I’ve got hundreds of memories of the Capitol,most of which are very good.

Listed as a Comerford-Publix theater in the 1945-46 International Motion Picture Almanac. The architect was likely Leon Lempert, Jr.

The August 23, 1926, issue of The Scranton Republican said that Michael Comerford’s new Capitol Theatre in Hazleton was scheduled to open on Labor Day. That would have been Monday, September 6. Jack Theakston is right about the likely architect. Every house built by Comerford in the 1920s that I’ve found attributed to an architect in newspaper or trade journal items has been attributed to Leon H. Lempert, Jr., or the firm of Leon H. Lempert & Son.