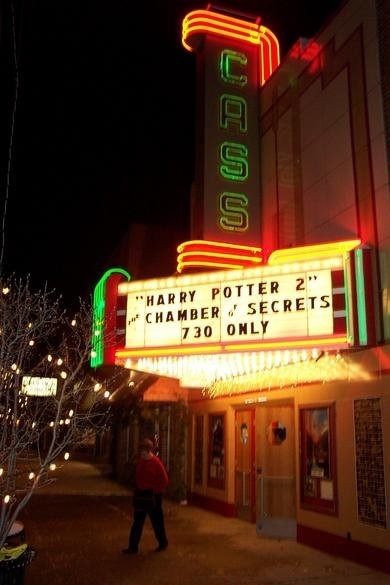 The Cass Theatre is located in Cass City, on Main Street. Opened in 1940 and replacing an earlier Cass Theatre which was gutted by fire in 1939, this Art Moderne-style beauty features a terrific neon-lit triangular marquee and vertical sign, and shows first-run films in its single-screen auditorium.

My uncle’s list of Johnson Construction Company theater projects shows the Cass Theatre as a 1938 job.

The Cinema Treasures website says that the theater was gutted by a fire on November 29, 1939 and was then rebuilt and opened in 1940 as “The New Cass Theater.” If my uncle’s project time is accurate, then the theater was restored after Al Johnson’s work. However, if the project time was 1939-1940, then Johnson Construction most likely did the renovation work.

In any case, the accompanying Kodachrome slide that Al shot in June 1948 (with the 1947 film “Undercover Maisie” on the marquee) shows the theater in the style that characterizes all of the Johnson theater projects between the mid 1930’s and the late 1940’s. The porcelain-like red, cream and tan colored exterior tiles were a feature of almost all of the Johnson-built theaters of the era.

The Pastime Theatre launched here in 1926. It then added sound to remain viable. At its ten-year mark, the Thumb Theatres Circuit owned by C. Harold Shuckert gave the venue a streamline moderne makeover renaming it as the Cass Theatre in 1936. That structure was completely gutted by fire on November 29, 1939 with the structure in place. The theatre was rebuilt using its existing walls. Bathed in blue carpeting and blue and orange seating by Irwin Seating, the theatre reopened on March 1, 1940 with walls covered in Nu-Wall wood paneling. The opening features were Jackie Cooper in “Seventeen” and Andy Devine in “Mutiny on the Blackhawk.” The grand opening marquee can be seen in the photo section.

This appears to has closed as the official website is no longer working as well as no showtimes anywhere.

I just called their listed number and got a message saying they were open. Closed on Mondays and Tuesdays and advertising the latest Disney release.