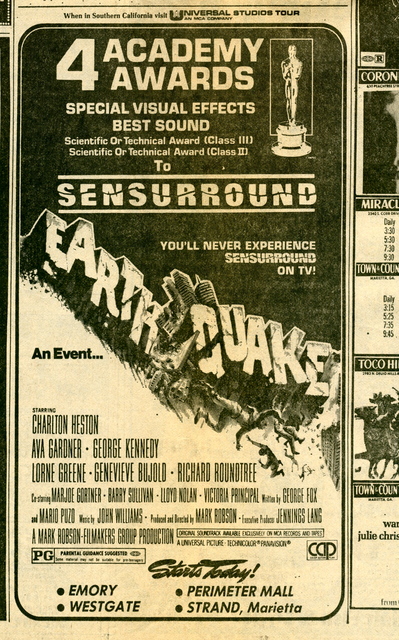 Opened in December 1973, this Perimeter Mall was one the first General Cinema theatres in the Atlanta area. Although the theatre’s exterior and glass-encased lobby were cool and sophisticated, the auditoriums were awful. The theatre initially had three auditoriums, distinguished by seating capacity and screen size.

During the 1970s', the largest of the three auditoriums was split down the centre to allow for a fourth. This action afforded the theatre with three narrow auditoriums with very small screens. It was unfortunate that a GC didn’t provide this upscale community with a quality product akin to what Loews and ABC were offering at that time.

Perimeter Mall has been without a cinema since the GC property was closed and razed in 2000.

Brock King I am on Facebook friend me and we can talk, I look forward to this. I will try and reach you by email, but I am just learning how to do it!!

Chuck Famous Players Publicity was respected throughout North America and they certainly would be decent enough to share some of their art work with other chains, both within the Paramount Theatre Associates group and other chains. Other chains include Loew’s, General Cinemas — associated chains include ABC , etc.

Famous Players Canadian Corporation was the Canadian arm of Paramount-Publix Theatres, the largest and greatest chain of them of all, proudly built by Adolph Zukor, Paramount founder!!

I know Russ Bovin was a great showman and Loew’s operated some great theatres. We had two right in Toronto, AND that artwork would have been passed to the local Loew’s managers and then down to your home office. By the way The Loew’s Uptown Theatre in Toronto was pooled with Famous Players Canadian Corporation and booked by Famous Players. The profits were split in equal shares. The reason is because Loew’s had only two theatres in Toronto, and Famous Players had all the rest which isn’t exactly a strong position to be in. The Loew’s Yonge Street Theatre at 189 Yonge showed all the great MGM classics in Toronto, while Famous Players showed all the MGM product across the country. Maybe you can understand how Loew’s got ahold of some Famous Players advertising material.

Loew’s and Shea’s in Toronto were operating partners of Famous Players Canadian Corporation. When the contracts for the theatre partnership were signed each of the parties agreed that if Famous Players so desired, they had the right to close any of the theatres at any time. Chuck, that is real power I hope you understand that!!

My favorite memory of this theater is seeing “Rocky Horror Picture Show” there at midnight showings. I certainly saw plenty of other movies there too. Went movies would sell out at our usual theaters we would drive out to Perimeter.

This opened on December 21st, 1973. Grand opening ad in the photo section. This marks the entry into the Atlanta area by General Cinemas.

Good to see the pics of the last night, sad to see the demo. I’m still surprised at how quietly this location closed considering how significant it was on the north side of town. Everyone knew Perimeter and the midnight movies were legendary. At least they didn’t just board it up and leave it to rot like so many others.

You’re right about Perimeter’s counts being “legendary”. I remember having to call our figures in to their office every night and just being amazed at how well they always seemed to do, especially compared to our little triple at Regency Mall in Augusta. Their weekend midnight movie takes always blew us out of the water. Took me a long time to realize I was comparing apples with oranges. Our demographics weren’t near the same, but even with that, Perimeter’s were still great. A few years later we sort of got out of touch with everyone’s numbers because we started utilizing Telxon!!! (GCC finally hit the computer age!!). Good stuff.