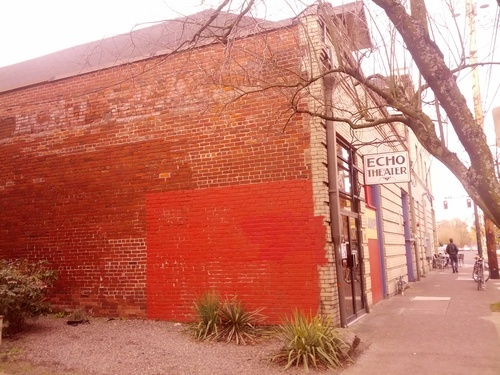 The Echo Theater opened in 1910 as a silent movie theater with seating listed at 350. The Echo never made the transition to sound movies and closed in 1929. Over the years the building has been used by various companies such as a storage company and two different plumbing supply companies. In 1983 the Do Jump Movement Theater acquired the building. The theater underwent two major renovations and currently has seating for 150. The Echo Theater is now used for plays, dance productions, parties, and concerts.

You can see an old Echo Theater program from 1919 at http://www.dojump.org/html/echoprogram.htm

“The Echo Theatre opened in 1910 as a silent movie house. It was one of several businesses in The Frances Building, a two story brick commercial structure on the corner of 37th Ave. and Hawthorne Blvd., which is now on the National Register of Historic Places.

When “talkies” arrived at the newer Bagdad Theater across the street, it became a dance hall. From 1929 to 1954 Eastside Van and Store occupied the space. It then remained empty until 1969 when Plumbing & Electric Supply moved in for four years, followed by another plumbing supply company, Republic Enterprises.

In 1984 Do Jump Movement Theater acquired a long term lease on the space to serve as its resident studio and theater.

…In 1989 the Board of Directors decided to call this new performing arts center by its original 1910 name: The Echo Theatre."