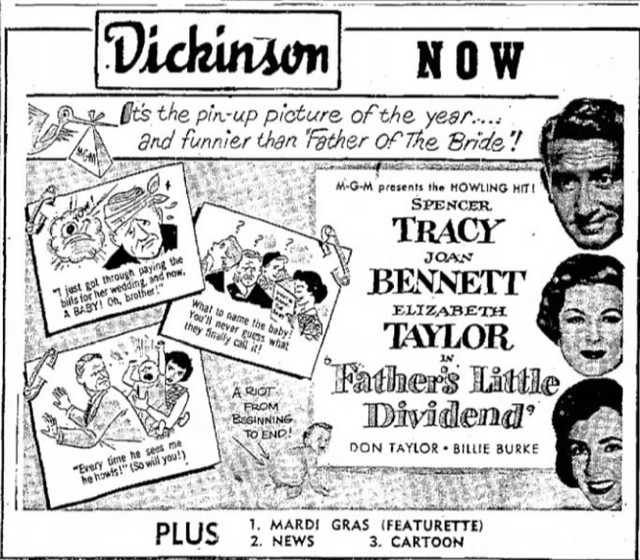 The Princess Theatre was located in downtown Moberly on N. Williams Street and W. Rollins Street. The Princess Theatre was opened October 25, 1912. On April 12 it reopened after a remodel as the Sosna Theatre. On June 26, 1946 it was renamed Dickinson Theatre. On February 6, 1960 it was renamed Amy Lou Theatre and it closed in 1962 when it was demolished for a parking lot.

In January 1960, the Moberley Monitor-Index announced that Elmer Bills and son had purchased the Dickinson Theater. The theater was to be closed and renovated, and would then open under a new name. The Bils also owned the 63 Drive-In in that area.

If the aka given for this theater at CinemaTour is correct, from 1936 until 1946 this house was called the Sosna Theatre. It was the first of two houses using that name in Moberly.

A photo of the first Sosna can be seen at upper right on this page from Boxoffice of June 27, 1936. The caption indicates that the front was new at that time. (The second Sosna at Moberly opened in 1946, according to a Boxoffice item from 1949, and became the State Theatre in 1950.)

The first Sosna became the Dickenson Theatre when it reopened in 1946. In 1960, it was taken over by Elmer Bills and renamed the Amy Lou Theatre, which the February 29 issue of Boxoffice said had opened on February 9. The January 29, 1962, issue of Boxoffice said that the Amy Lou Theatre had been condemned by the city of Moberly to make way for additional parking, but would continue to operate until demolition was ready to begin. I haven’t found when the theater actually closed.

This house must have been called the Princess before becoming the Sosna in 1936. CinemaTour also lists Rialto and Baby Grand as aka’s, but Baby Grand at least, and perhaps both, might be mistakes. A 1925 Reel Journal item about the destruction of the Grand Theatre by fire said that while it was being rebuilt, the management had taken over an old theater on 3rd Street and woule operate it as the Baby Grand. Unless the magazine was mistaken about the location, the Baby Grand could not have been this house on Williams Street. I don’t see a Cinema Treasures listing for a theater on 3rd Street.

Louis Sosna and his brother Sam opened a Sosna Theatre at Mexico, Missouri, in 1940, which a Boxoffice item of that year says was designed by Moberly architect Ludwig Abt. This makes me wonder if the two Sosna theaters at Moberly might also have been designed by Abt. The two houses closely resemble each other, and were probably both done by the same architect, and it could have been Abt. I haven’t found confirmation of this surmise, though. Maybe somebody local would know for sure. Also, if somebody could come up with a photo of the Sosna at Mexico we could see if it resembled the two Moberly houses.

Looking at the map of Moberly, I have to reconsider my belief that this theater could not have been the Baby Grand. 4th Street is one block west of Williams Street, and 5th Street is two blocks west. It looks as though Williams Street was probably called 3rd Street at one time. The next two streets east have names rather than numbers, too, and most likely they were once called 2nd Street and 1st Street.

The site is now a parking lot. Was there someone callef Amy Lou?

I think the reference to a 3rd St was just sloppiness. Even on the 1884 Sanborn, Williams is Williams and only 4th and 5th are numbers.