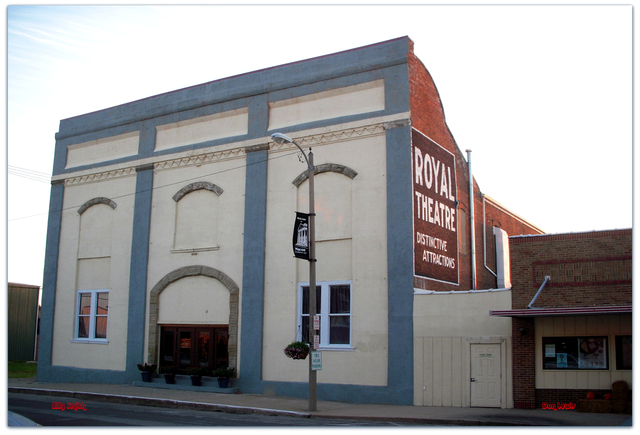 Located on N. Rubey Street in Macon, the Jobson Opera House was opened October 31, 1889 with 800 seats. It has had many changes of ownership and names over the years. It became the Royal Theatre on August 25, 1923. On December 31, 1929 it became the Dickinson Theatre and October 28, 1936 it became the Macon Theatre. Since 2004 it has been home to the City of Maples Repertory Theatre.

When I was a student at Truman during the 70’s we made many trips to Macon to the Royal for movies. It was not very plush inside. The candy counter used a cigar box for change. Glad it is still being used.

As best as can be determined, this is the timeline of this venue.

Opened as the Jobson Opera House on October 31, 1889. By 1897, Col. F.W. Blees takes over and calls it the Blees Theatre. Harry Logan took on the venue continuing as the Logan Theatre in 1911. Motion pictures were later added to the live mix with the theatre becoming primarily known for motion pictures.

This is where things become a bit tricky. The Logan goes dark late in 1918 and very briefly reopens in a new location in 1919. On October 3, 1919, the original Logan was taken over by W.D. Woods of Kansas City. The Princess Theatre launched on October 11, 1919 with “His Majesty, Bunker Bean” and listed as “formerly the Logan.” The short-lived Logan location became the original location of the Grand Theatre. The original Grand opened in July of 1919 – it, too, was also listed as “formerly the Logan.”

On December 29, 1922, the Princess under new owners relaunched as the Yale Theatre with “My Old Kentucky Home.” After closing in June of 1923, the venue relaunched under J. Earl Hayes as the Royal Theatre on August 25, 1923. The Royal Theatre’s “ghost sign” /outside advertisement was maintained into the 21st Century.

On December 31, 1929, the theatre became the Dickinson Theatre installing RCA sound and converting the interior to a Moorish architectural design. Dickinson sold his interest in the theatre and one of his employees took on the house. Under new operation, it re-launched October 28, 1936 as the long-running Macon Theatre. In 2004, the facility became live theatre opening its first season as the Maples Repertory Theatre.

That all may be incorrect but it’s the best timeline based on the local papers and the trade press.

On the 1916 Sanborn, the Logan has 750 seats, and is also showing vaudeville. To the south, behind some tiny wooden storefronts, is a large lot labeled ‘Air Dome’ and ‘open seats’. The little shack on the corner with Vine is serving as a ticket office. I assume this was an associated operation, probably showing movies outside when the weather was warm.

The Jobson Opera House is listed under Macon MO in the 1897-98 edition of the Julius Cahn Official Theatrical Guide. H.E. Logan was Mgr. 800 seats, theatre on ground floor. The proscenium opening was 27 feet wide X 18 feet high; the stage was 27 feet deep. There were 3 weekly newspapers; and 3 hotels for show folk. Railroads: Wabash, and CB&Q. The 1897 population was 6,000.