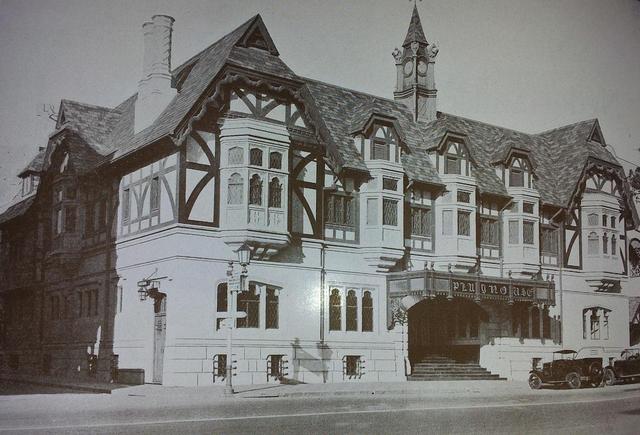 Located on Smith Street (today renamed Anton Lembede Street). This building started as a picture palace in 1896 and was rebuilt in 1935 in Tudor Revival/Atmospheric styles. It reopened on 7th June 1935.

Closed as a cinema in the 1970’s, the building has since been restored and has now been combined with the adjacent former Prince’s Theatre/Colosseum Theatre to form a five venue arts centre.

Sorry but the Playhouse and the Princess were different theatres and it is not a multiplex,the largest theatre is used for opera,although the venue does host the Durban Film Festival.I will do some more research.

The Playhouse Theatre in Durban was originally opened on 7th June 1935 as a live theatre. It only became a venue for film shows later on. It was converted back to a live theatre venue when the Kinekor Organisation closed the establishment in the 1970s. It then became the official venue of the then Natal Performing Arts Council.It had no connection to the Prince’s Theatre (not Princess)which was situated on an adjacent city block. This particular theatre was refurbished in the late 1960s to become the Colosseum Theatre.

Some pictures and history here; http://www.playhousecompany.com/history.html

Thanks john martin.I have just discovered the website.The original information was off a website I found but have since lost it.The Playhouse complex consists of an Opera Theatre(1224 seats)Drama Theatre(474 seats)and Loft(136 seats).The Prince’s Theatre opened in July 1926.
The Opera Theatre has a starry sky,so could it be described as an atmospheric.

I have fond memories of this cinema circa 1958-9. Here I saw The Fly and The Vikings. I was eleven and certainly too young for one. But the principal joy was the cinema building itself: a Tudor exterior, which was announced from along the pavement by a kerbside hanging post sign (just like an English country pub). Inside the auditorium – a complete style switch to a Castilian castle courtyard open to the sky. And it almost really was – as there were, tiny stars set in the night sky, and just as you were marvelling at this, thin wispy clouds drifted across. It had a cloud machine. A complete change of ambience from the noise of chatter and crockery in Durban’s other really unique cinema, the Oxford Bio Café.

@bevgender…thank you for referencing the Oxford Bio Cafe. My grandmother, Mrs Molly Knight, was the manager of the Oxford Cinema for quite a long time. There was a place in front where you could buy food and soft drinks and you’d take them into the cinema itself. There were shelves at the back of the seats and you’d eat while watching the movies. The movies were on a loop, so you could watch them over and over again. During the barely-lit intermissions, an African ‘boy’ would come along with a big broom and sweep away the sawdust and remains of food. Sometimes I’d go round the back, behind the black curtain, and speak to my grandmother in her office. I’d have been about eleven or twelve. I spent a lot of time in that cinema, watching mostly very awful B-grade movies, which were, still, way more wonderful than what was happening outside. Needless to say, no black people could attend the cinema then. This period still lingers in my memory fifty years afterwards.