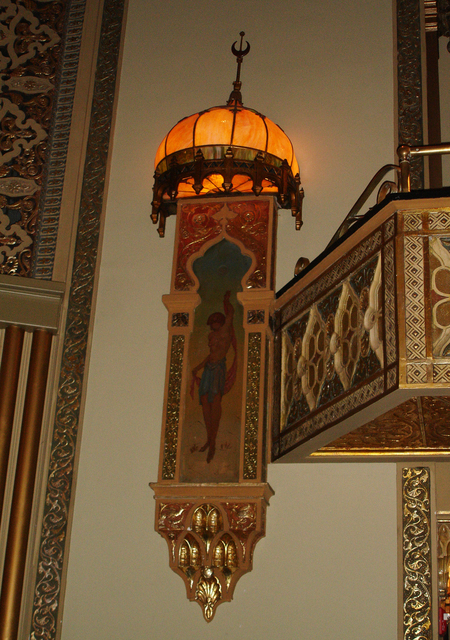 At the turn of the 21st Century, the Rajah Theater was the only downtown movie palace to survive. Its sister palaces, the Astor Theater, Embassy Theater and Loew’s Colonial Theater had all been demolished.

Built in the 1870’s as a market with a Masonic Temple on its upper floors, it became the Academy of Music in 1886. Purchased by the Rajah Shriners in 1917, it was home first to vaudeville, motion pictures and live appearances, then to quality symphonic, opera, ballet, popular music and theatrical performances. Seating was provided for 2,000.

In 2000, the Berks County Convention Center Authority purchased and renovated the aging movie palace. The $7 million facelift established a permanent home for the performing arts in Reading and Berks County. At that time, the Sovereign Bank purchased “naming rights” and the Rajah’s name was changed to the Sovereign Performing Arts Center. It is now the home of the Reading Symphony Orchestra and the Reading Civic Opera Society and a wide variety of other events such as Sesame Street, Peter Pan, The Nutcracker, and many “smooth” jazz concerts. The naming rights have been purchased by the Santander Bank.

Does anyone have any further information on the history, seating, etc. for the Rajah?

I worked as an usher at the Rajah in the 1970s.
Locally Rajah was pronounced Roy-yah.
I have not been in it since Sovereign renovation. I hope they kept
the wonderful orientalist detailing.

At July 2009 tour of Theatre Historical Society of America of this very interesting exotic theater, we were told there are now 1752 seats.

An grand opening announcement from September 10th, 1922 is on this page at View link

The old Rajah Temple was gutted by fire in May, 1921. The rebuilding project was extensive, costing approximately one million dollars and taking more than a year to complete. The five-bay facade of the original building was retained, though there were extensive alterations to its upper floors, but the rebuilt theater’s entrance was in a new annex that was erected adjacent to the surviving front portion of the original structure. The auditorium of the new Rajah Theatre was new construction as well.

The book “Reading in Historic Postcards” includes cards depicting the original and the rebuilt building on page 107. The text on the latter card says that the Austin organ installed in the rebuilt theater had cost $35,000.

The June 11, 1921 issue of the Reading Times reported that the New York firm of E. C. Horne & Sons had been chosen to design the repairs and addition to the Rajah Temple which had been devastated by a fire the previous month.

Name of the theater has been changed along with that of the bank sponsoring it; it’s now the Santander Performing Arts Center. Web site has moved here.