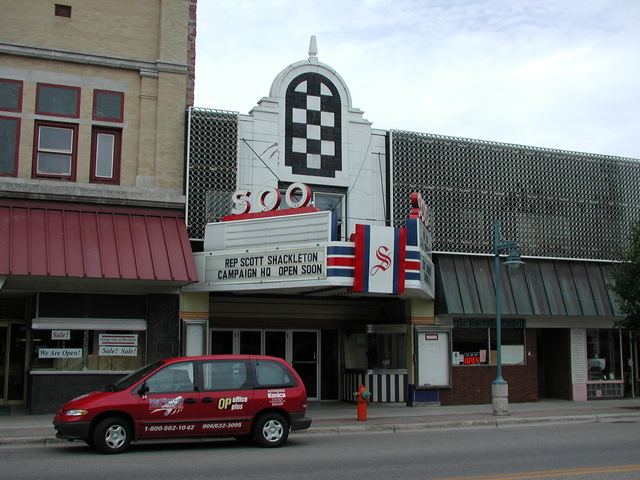 Built in 1929 to vaudeville house plans with full stage, fly-space, dressing rooms beneath stage, twin organ lofts (organ never installed), and orchestra pit, the Soo Thetare is the only remaining vintage house in the eastern end of Upper Michigan and the only venue in the area that offers the fly-space needed for full scenic productions. It opened in March 1930.

As late as the early-1970’s it was used as a live performance house in addition to cinema. In 1974 a huge concrete wall divided the auditorium into a duplex cinema for film only. The Soo Theatre closed its doors in 1998, the victim of a newly-opened faceless multiplex on the outskirts of town. The final film showing was “The Wizard Of Oz” with five patrons in attendance.

After several proposals for the adaptive reuse of the building, in 2003 it was acquired by Soo Theatre Project, Inc., a local non-profit group dedicated to its renovation and restoration as a community performing arts facility.

A recent Michigan Cool Cities grant has permitted remodelling of the theatre’s retail space as a regional performing arts school, opened in September 2005.

Renovation of the auditorium, stage and lobbies eventually got major funding. In the meantime, the dividing wall has been demolished by local volunteer labour, and plans were underway to place the Soo into limited operation as a summer theatre venue. It reopened in April 2021.

This was the place where I took my two older kids to their first movie back around 1992. We saw Aladdin and the three of us had a great time. It was a real nice place with alot of old fashioned charm. We only lived there for a few years but I remember discovering and poking thru the ruins of a drive-in theatre on the south outskirts of town, the screen had fallen down and the area was overgrown with weeds but the projection house/concession stand was still standing. I don’t know what it was called but maybe somebody out there knows and could place it on this site

Does anyone know the names of the other theatres that use to be in this city? They must have had more than one cinema.

The Soo Theater was a great little movie theater. Used to come over from the Canadian “Soo” to see movies here. Liked the little restaurant/diner next door.

Ironically, with the pending closure of the Varsity Cinema 10, Michiganders will have to cross the border and go to Canada in order to see a movie in a theater.

I was a projectionist here in the 70’s and early 80’s. To answer some of the commenters above, the drive-in theater was owned by the same guy, Joseph DePaul, a noted local businessman. (I worked there also). It was called the Starlite Drive-In and was at Pine Grove (near intersection of Mackinac Trail and 6 Mile Rd.) There was one other theater in town, further north on Ashmun St., called the Temple. Also owned by Mr. DePaul. It was the victim of a rather spectacular fire sometime in the 70’s. The restaurant next to the Soo Theater was actually in the same building along with a couple of other shops. It was the American Cafe, and yes it was very good. Real home cooking, back in the day, and very popular for lunch.

I grew up in the Soo. Probably 90% of the movies I saw between ages 5 to 18 were in the Soo theatre. I always thought it was unique even as a child because of the old architecture and design of the two cinemas. The red and blue cinemas which were so aptly named. Since moving out of state and traveling much of the United States, I’ve yet to find another theatre like this one at least that is still operating. It definitely had a phantom of the opera thing going on with the happy and sad masks that decorated the walls. Former patrons will remember that. I also remember the American cafe. I didn’t know that it was once a single theatre and a wall was put in to separate them but that would make sense because the rows of seats were crooked on the right and left side of the red and blue cinemas respectively. Thanks for the bit of nostalgia cinema treasures!

I was brought up in Sault Ste. Marie, MI and lived there during 1936-49. I went to the Soo and Temple theatres often and the Princess theatre in Soo, Canada. My father used to play the piano at the Soo Theatre for silent movies before sound came in. Some very pleasant memories.

The status should be open. The website lists productions beginning in April and continuing through September.