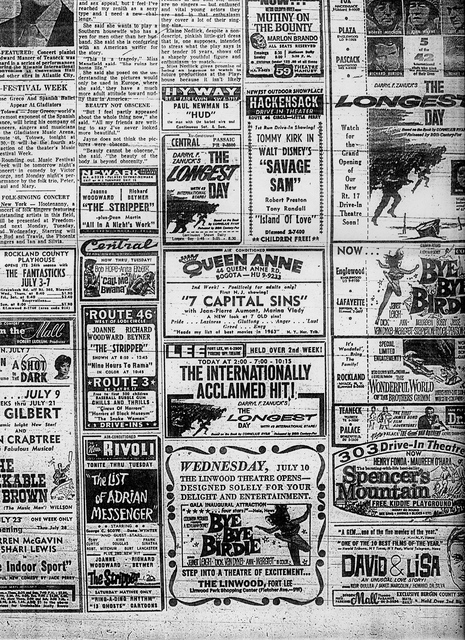 Opened on July 10, 1963 with “Bye, Bye Birdie”, the cinema was located in the Linwood Shopping Center. This theatre survived into the 1970’s but was converted into a CVS store.

Listed as a 2 screen in the 1991 International Motion Picture Almanac. Part of United Artists.

I remember the Linwood Theater well but can’t recall exactly when it closed down. The last films I recall seeing there are Pink Floyd-The Wall and Creepshow which were both released in 1982. I was just a kid then but I remember this being my family’s favorite theater for while. We would see a movie and have dinner at the nearby Red Oak diner which is still open and is a great classic NJ diner.

The Linwood Park apartments are there and the Linwood Shopping center still exists. As mentioned above, the theater building is now a CVS but I don’t believe the building was completely demolished. You can still imagine the general shape of a movie theater from the outside and you can still see the multiple fire exit doors on the side and rear. The CVS sign is now in the place of the original marquis out by the street.

In the 1970s and early 80s this theater was a great alternative to the crowds of the Paramus theaters on Rt 4 and Rt 17. Films shown there were not always the very first run but they were well ahead of the second-run houses such as the Rialto in Ridgefield Park. The Secaucus and Ridgefield Park Loews theaters did not exist yet so other than the local drive-ins (which were fading fast at this point) there were not many alternatives in this part of Bergen County at this time, early 1980s.
They also had this very unique, psychedelic color floating bubble effect type of image on the screens in between the shows. This was before the days of movie ads during the walk-in of course. Can you imagine today a theater “wasting” any visual space on non-advertisement images?

Again, status needs to be changed from “Demolished” to “Closed,” sinc the CVS at this location actually operates within the shell of the theatre. Also, the address listed is incorrect. Theatre was actually located at 168 Fletcher Ave., Fort Lee, NJ 07024.

Months before the JFK assassination. 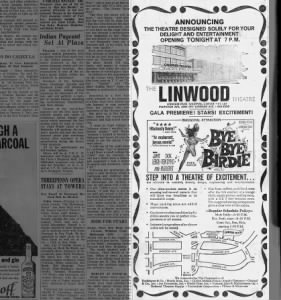