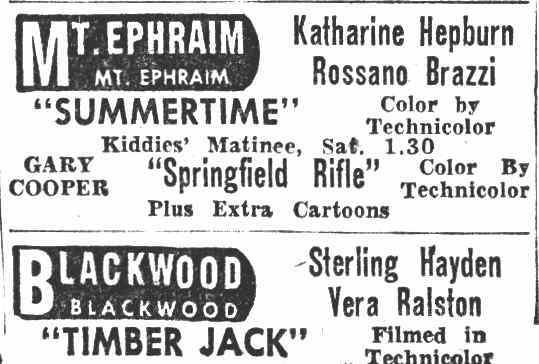 Open since at least 1924, this theatre is still listed as operating in the 1951 FDY.

is this the one that was along the pike across from the library that got torn down in the late 80s/early 90s and is now a small grassy area with a gazeebo?

I remember seeing it get torn down. I was living in the Blackwood Estates section at the time. I moved there in late 87' and from what I was told, the theatre had been closed for several year’s. I do remember they were looking for a buyer but the building needed extensive repair’s mainly to the roof. In fact, if memory serve’s me correct, they were willing to sell the thing for like a dollar but the repair’s exceeded the “at time” value of the building. Of course and unfortunatly that was about ten year’s before the big realestate boon in South Jersey. Now as nursebrittany has described, sadly, it is a small grassy “area” complete with gazeeeebo! Had this theatre been in a Collingswood, Haddonfield or Woodbury it would probably be, if not a theatre of a sort, then a resturant or something other than a small grassy “area”. The above mentioned town’s know how to “preserve” and “restore”. This theatre was just in the wrong place at the wrong time!

Wasn’t this the theater that somebody covered with aluminum or vinyl siding and renamed the “Movie Box” for a while? It went from second run to adult films, then a company called CenterStage came in, took off the siding and tried live theater for a year or two before running out of money.

Don’t know Rick, I’ll have to try and look up one of my old Blackwood neighbor’s who grew up down there and see what they remember. like I said. It was closed in 87' when I moved there…

In 1979 the original marquee was removed and the theater was renamed the Movies. Originally owned by the Harwan family. Demolished in 1991.

GPS location site, has a little write up on the Blackwood Theater Park, as well as photos.