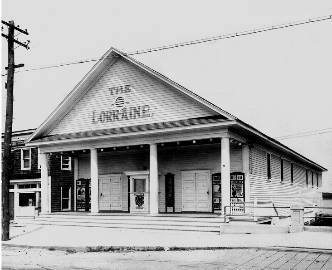 The Lorraine Theatre was opened in 1918. Listed in the 1951 Film Daily Yearbook, this theater has been a mall known as The Shopper’s Wharf since at least 1975. It was badly damaged in Superstorm Sandy and was demolished in November 2013.

Homepage for one of the stores:

Listed as a Walter Reade Theater in the 1970 Film Daily Yearbook.

The Lorraine Theater was built in 1917 by Albert C. Lewis, who also operated the Colonial Theater in Seaside Park. The buildings are very similar in design. After Lewis’s death, his widow Josephine and her second husband, Lee Newbury, operated these two theaters as well as six others on the Jersey Shore. It was purchased by the Walter Reade organization in 1965. I believe that the conversion to a shopping mall occurred around 1973, though I have not found a definitive date. Unfortunately, this building was damaged in Superstorm Sandy and razed in November 2013.

The March 16, 1918, issue of The Moving Picture World had this brief but mis-located notice: