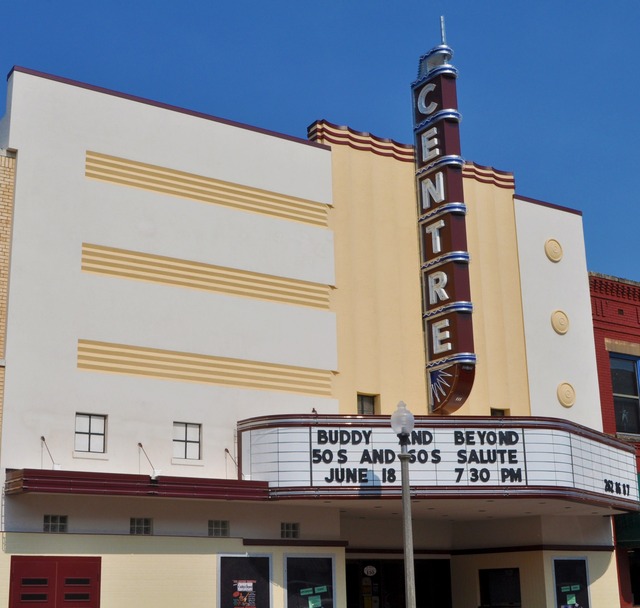 Built on the site of the El Caro Theatre which was destroyed by fire in late-December 1943. The Centre Theatre was opened by El Reno Theatres on February 26, 1945. At opening it had a seating capacity for 750.

I also took some photos of the abandoned Squaw Drive-In in El Reno. They are located at View link

The structural engineer checked the building out a couple of days ago. It is still sound so the restoration work should continue.

Nice theatre,could use a little paint.

I worked at the Centre/Cinema Theatre from 1968 until 1991. Have a lot of wonderful memories of fun events and great friends during that time. From 1969 until 1991 the theatre was managed by Curtis and Geraldine Bullington, very good friends of mine. I worked in the projection booth, box office, concession booth, as well as tore tickets and janitoral work. I also worked during that same time at the old Squaw drive inn. The screen tower is still standing, and the last time I was there, the old projection booth and concession stand was still standing as well. It was definitely a wonderful time being there all those years.

Thanks Jerry,Add more stories if you can!

The Centre Theater has been fully restored. Here’s a photo of what it looks like now (June 2011):

We could probably safely change the name of this theater to Centre Theatre. Oklahoma weather can rarely be praised for encouraging historical preservation, but this is definitely an exception. The facade blowing off this old closed-down theater was probably the best thing that could have happened to it. The work done is stunning in person.

The Centre launched February 29, 1945 with “Tonight and Every Night” supported by a cartoon, a newsreel, and the short subject, “Choo-Choo Baby.”