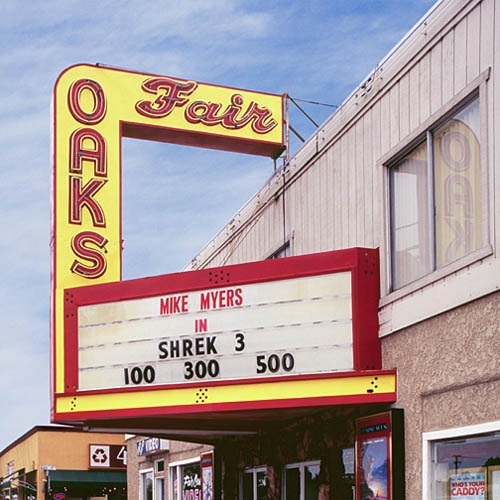 Opened on January 1, 1948. Single-screen theater that recently was remodeled for stadium seating. Currently shows a mix of family films, first-run product, and some move-over from the nearby Regal 10.

The operators of the Fair Oaks Theater also run the Sunset Drive-In in San Luis Obispo.

In 1938 and 1939, all three names were given, though always one name per item, for a theater operated by Charlie Olds. A March 5, 1938, item said that Charles Olds was taking over the dark Mission Theatre in Arroyo Grande and would reopen the 400-seat house on March 15, after remodeling was complete. There was nothing about him ever opening a second theater. Olds vanished from Boxoffice by 1945, but the multiple theater names continued.

An ad in Boxoffice of January 17, 1948, said that the Arroyo Theatre had installed new chairs. The February 18, 1950, issue said the Grande Theatre was getting a complete remodeling. In 1949, one item named George Page as the operator of the Arroyo Theatre. Did he buy the rival house, or was this an example of confusion by Boxoffice?

I haven’t found any of these three names mentioned after the 1950 item other than retrospectively (former owner of the Arroyo, for example) but the Fairoaks (Boxoffice split the name into Fair Oaks a few times, but Fairoaks was their most frequent usage) is last mentioned in the January 8, 1955, issue.